The clubfoot of polar bears will not lead to their extinction 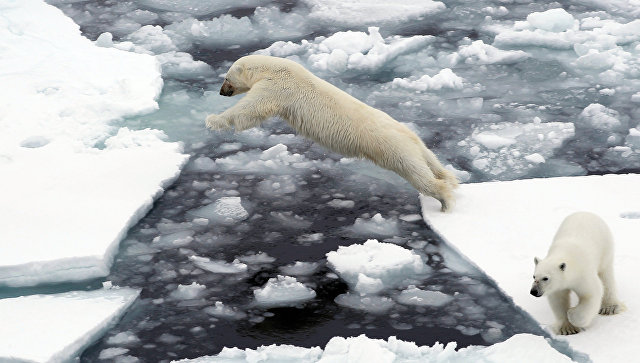 Ineffective, “clumsy” gait of polar bears was not so energy-intensive, as previously believed by scientists. It is unlikely to cause their extinction, say zoologists in an article published in the Journal of Experimental Biology.

“It was extremely difficult for us to understand how we can measure the walking efficiency of polar bears – they do not like being forced to go somewhere and at the same time they put a heavy mask on their faces, and it was also dangerous to attach it to such a large predator. we taught them to step along the treadmill, “says Anthony Pagano, a biologist at the University of California at Santa Cruz, USA.

Polar bears extract food exclusively on the surface of sea ice, where their snow-white skin helps them to sneak up on seals that pop up to ice holes or rest on its surface. If there is no ice, then the bear will be deprived of camouflage and he will have almost no chance to catch a pinnacle, which will cause him to starve for a long time.

For this reason, reducing the area of ​​polar caps under the influence of global warming is one of the main threats to the lives of these predators today. According to some groups of ecologists, the number of polar bears can be reduced to a critically low level in 10 years if the northern ice continues to decline at the current record pace.

Pagano and his colleagues at the beginning of this year revealed a new threat to the extinction of polar bears. They found that the “owners of polar regions” spend about three times more energy at rest than other bears of similar sizes, which can cause their extinction if their traditional food – seals – becomes even more inaccessible.

After that, biologists remembered that in the 1980s their colleagues found hints that polar bears were “champions” for clubfoot – as the biologists said, they spent significantly more energy on walking than their brown relatives.

Checking these statements, as Pagano recalls, was not so simple, as it is impossible for bear to wear devices that measure the rate of their metabolism by the amount of oxygen consumed, and they can not be placed in a cage allowing similar experiments with small animals.

Biologists from California solved this problem in a witty way – they bought a special treadmill for a horse where you could plant a bear, and placed it in a sealed chamber of bullet-proof glass where they could measure changes in the level of oxygen and carbon dioxide.

The next two months biologists spent on selecting suitable “baits” for bears and their training in walking in this “squirrel wheel”. Interestingly, brown bears immediately liked this exercise, and their white cousins ​​were extremely reluctant to learn this art.

When both those and other predators got used to the role of “squirrels,” scientists began to measure how many calories they burn for every meter of distance traveled. To their great surprise, both grizzly and polar bears spent about 2.2 kilocalories per meter passed, corrected for their difference in mass, and did not yield to other animals of similar size in walking efficiency.

Similar results of measurements indicate that the degree of “clubfoot” of polar bears was greatly exaggerated – low efficiency of running and walking will not cause their extinction. On the other hand, high metabolic rate still threatens their existence, conclude Pagano and his colleagues.