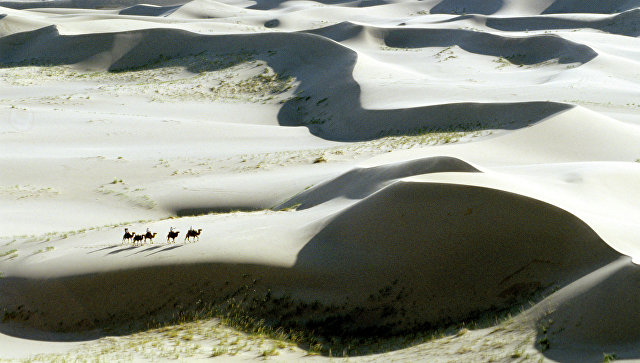 Sandstorms that originate in the Gobi desert paradoxically turned out to be the main defenders of China’s cities from the establishment of an “eternal” smog there, researchers found that published an article in the journal Nature Communications.

“We saw for the first time how the desert dust, wind and air pollution associated with human activities interact, it turned out that desert sands play an important role in ensuring the air quality that hundreds of millions of people in the east of the PRC breathe,” said Jan Yang (Yang Yang) from the University of California in San Diego (USA).

Beijing, as the scientists say, is considered one of the most polluted cities in China and on Earth as a whole. Above the city, the smog almost always stands, which the city authorities unsuccessfully tried to suppress on the eve of the 2008 Summer Olympics. The reason for this pollution residents of the city and many environmentalists believed explosive growth in the number of cars – over the past 15 years, their number has increased by 7 times and reached 17 million.

Observations of this smog in recent years, according to Yang, uncovered an unusual pattern – fog over cities in the east of China appeared more often in those winter seasons, when the winds blew unusually weak. Interested in this anomaly, scientists tried to find a connection between winds and smog.

To this end, Ian and his colleagues analyzed how the entire climate system worked in China over the past 40 years, using data from Terra and Aqua satellites and detailed computer climate simulations. Thanks to them, scientists found that the answer to their question was extremely unexpected.

It turned out that variations in the frequency of appearance of smog were generated by the Gobi Desert, or rather by its dust, which falls on the territory of the east of China along with the winds. This dust, as scientists discovered, unexpectedly strongly influences the dispersion in the temperature of the surface of land and seas off the coast of China – a decrease in its concentration in the air leads to greater heating of the land and a decrease in the warming of the ocean.

This, in turn, affects the behavior of winds during the winter, since the difference in temperature between sea and land – one of the main “engines” of air masses – becomes less pronounced in cases where the Gobi “supplies” relatively little dust to the eastern Part of China.

Thanks to this, as calculations of climatologists show, winds in China are slowing down on average by 0.06 meters per second. Such a change may seem inconspicuous for a person, but it is enough to make the air above the cities of China more “standing” and increase the concentration of droplets of aerosols in it by 13%, which breeds smog.

Such an unusual relationship between the desert, winds and smog, as the scientists note, well illustrates that not all environmental problems are associated exclusively with human activities – their severity and intensity, it turns out, can vary greatly under the influence of natural forces. This factor, according to Yang and his colleagues, should be taken into account when assessing and combating the effects of environmental pollution, including smog in Beijing.