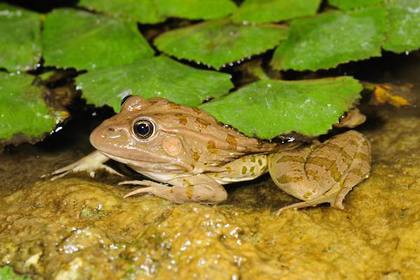 Frogs can choose where to go, guided by the magnetic field of the Earth, a similar property is in birds. This was established by the employees of the biological faculty and the Scientific Research Institute of Nuclear Physics of MV Lomonosov Moscow State University. Lomonosov University.

This ability is of considerable interest for study, since a person does not have it. Frogs lake (Rana ridibunda Pall.) From southern populations were selected as objects, each year they migrate from one reservoir to another after wintering for spawning and back.

At the first stage of the experiments it was established that in the autumn the frogs move from spawning ponds to the Moscow River and winter there, and with the onset of spring they return. Thus, migration directions were established: in the first case – to the north-east, in the second – to the south-west, in the opposite direction.

It also became clear that if during the migration frogs are taken in a field per kilometer from the water bodies and released there, they do not disperse randomly in all directions, as in the summer, but choose a direction parallel to the migration direction in their habitat.

As the agency reports with reference to the press service of Moscow State University, one of the authors of the work, Candidate of Biological Sciences Vladimir Shakhparonov said that experiments were set at night and in bad weather, so scientists suggested that to select the direction of migration, frogs are not using solar or stellar but magnetic Compass.

To test the hypothesis, scientists placed amphibians in a special labyrinth with an artificial magnetic field, the direction of which can be controlled and thus make the subjects move in the right direction. Frogs moved to the southwest, in natural conditions they would have come from the wintering river to the spawning pond.

As a result, Russian scientists managed to prove for the first time that frogs can choose the direction of migration from the place of wintering to the area of ​​reproduction along the magnetic field of the Earth. Now they are going to learn how the body of amphibians feels the changes of this field.