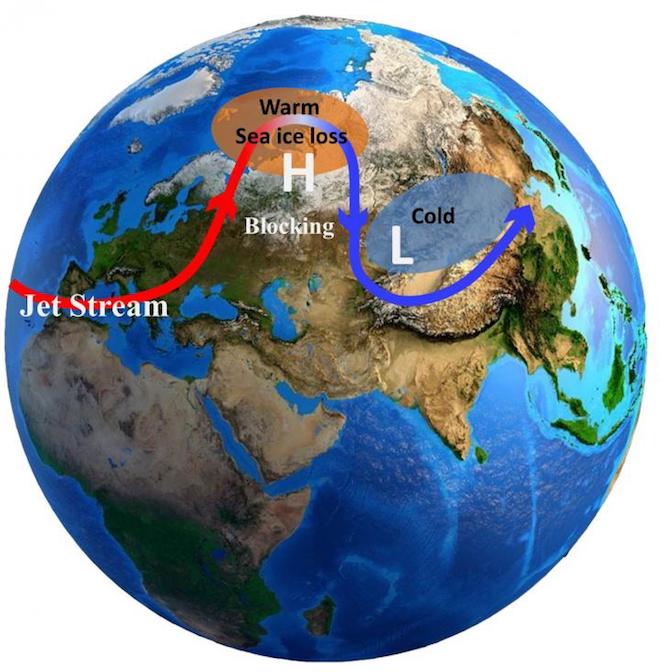 In recent years, warming in the Arctic and extreme weather events have attracted large-scale attention of the world community. Recently, Yao Yao and Luo Dehai, scientists from the Institute of Atmospheric Physics at the Chinese Academy of Sciences, investigated the effect of omega blocking in the Urals on extreme cold in Eurasia. And they managed to find out a few interesting facts.

The intensity and duration of the colds in Eurasia, associated with omega-blocking in the Urals, depend on the strength and vertical shift of the average background west wind over the middle latitudes. The strength and shift of the wind, in turn, are related to the warming of the Barents and Kara Seas.

The strong warming of the Barents and Kara Seas since 2000 weakens the meridional temperature gradient, the average background west wind and vertical shift. As a result, the Omega-blocking of the Urals becomes quasistationary (flowing in a limited system and propagating in it so quickly that during its propagation within the system its state does not have time to change) and long (rather than long-range). This leads to more frequent and severe colds in Eurasia and affects the warming of the Barents and Kara Seas.

Lo and his co-authors also studied the physical mechanism that is responsible for the empirical result. “Cooling over Central Asia occurred mainly from 2000 to 2015 and was associated with quasi-stationary and prolonged omega-blocking in the Urals,” says Lo. – The winter warming in the Northern Hemisphere, which was observed in the last decade (2000-2015) is most likely caused by omega blocking due to the background warming of the Arctic or loss of ice in the Barents and Kara Seas. “