The cycle of solar activity there are already 290 million years 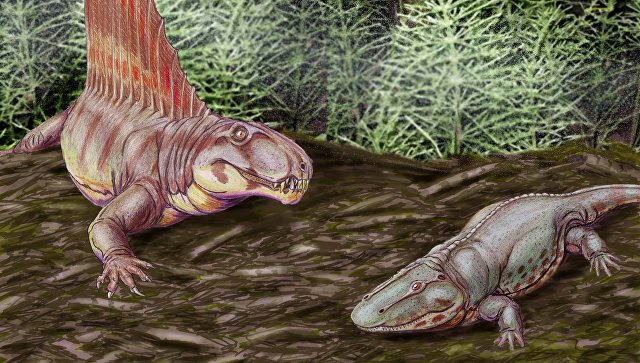 Petrified tree trunks and annual rings inside them have helped scientists to calculate the number of sunspots in the past and confirm that the 11-year solar cycle of activity already existed 290 million years ago.

Solar activity, as shown by observations over the past four centuries, changing in a cyclic manner with a period of approximately 11 years, during which the number of sunspots on the surface of the disc gradually decreases and increases. Abnormally long periods of calm in the Sun, such as the Murderously at least the 17th century and Gallinowski at least the 19th century, associated with the cold climate and the increasing number of outbreaks in the 20th century – with its warming.

In recent years, how to tell Luthardt Ludwig (Ludwig Luthardt) and Ronnie Roessler (Roessler Ronny) of the Geological Institute of Freiberg (Germany), scientists are actively debating about whether there was a similar cycle in the distant past of the Earth, 400-600 million years ago and before. In the past, because of the somewhat different structure of the subsoil, the Sun was about 5-10% less bright than now, forcing many scientists to look for traces of a more long or even absent cycles activity in rocks of Paleozoic and remains of ancient living beings.

For example, at the beginning of this century, American geologists announced the discovery of traces 2500 years of solar cycles in the sediments of shells found in the rocks of the Permian period in Texas. Such measurements often cause issues and disputes since deposits of such shells are formed much more slowly than continuing the cycles of solar activity.

Ressler and the first Luthardt found relatively consistent evidence that 11-year-old contemporary cycle of the Sun has existed almost 300 million years ago, studying the remains of ancient petrified forests, found in Chemnitz in the middle of the 18th century.

This forest is today, scientists believe, was buried under the ash eruption in the early Permian period, resulting in a whole grove of trees at the time, a giant tree-like ferns of the genus Agathoxylon, relatives of modern Araucaria, fossilized and survived to our days almost intact.

These ancient plants, despite the actual lack of leaves – the role of the authority of photosynthesis, they have performed cortex and unusual manner of growth, also had growth rings that can be easily seen in slices from Chemnitz. Ressler and Luthardt studied these rings, trying to find in them traces of the same process that links annual rings modern plants and the current solar cycle.

As the scientists explain, the plants, with all other things being equal, grow more actively during the peak of sunspots, because at such times they get more energy than usual and grow a bit slower during the calm in the Sun for the same reasons. Because of this, the average thickness of the rings in the tree trunks varies in the same 11-year cycle and solar activity.

Having studied hundreds of sections of trees in this stone forest, scientists found 43 sample of petrified trunks, which are quite well preserved prints of tree rings. In total, they numbered about two thousand rings in these samples, roughly about 70-80 layers in each of them, allowing them to check whether they obey the growth of this pattern.

It turned out that this cycle really existed, but he was slightly shorter, lasting not 11.2 years and 10.6 years. In General, we can say that the Sun behaves in a predictable manner for almost three hundred million years, although doubts on this score, as acknowledged by Ressler and Luthardt, it is likely that their colleagues will not disappear.