The death of the largest iceberg in Antarctica 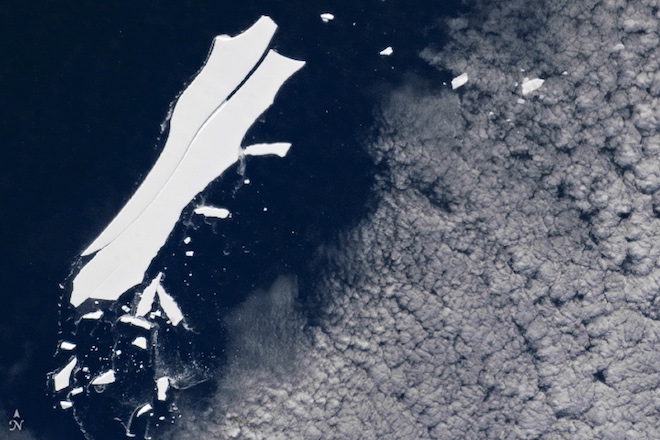 In March 2000, the largest ever recorded iceberg broke away from the Ross Ice Shelf in Antarctica. In 2018, after many years of drift, crushed under the influence of sea water and wind, the remainder of this iceberg seems to be approaching the end of its journey.

When the iceberg B-15 broke away from the glacier, its length was 296 km and width – 37 km. This corresponds to an area of ​​3,200 square nautical miles, comparable to the size of Connecticut. Since then, the B-15 has split into numerous smaller icebergs – most of them have already melted. There are only four parts left that meet the minimum size requirements, from which the US National Ice Center tracks icebergs (starting from 20 square nautical miles).

May 22, 2018 astronauts aboard the ISS took this picture – the length of the iceberg B-15Z was 18.5 km, and the width – 9 km. These dimensions correspond to indicators for monitoring, but if the iceberg splits into smaller parts, monitoring will stop. In the center of the iceberg, one can see a large crack, small floes break off from its edges.

The melting and cleavage of the iceberg is not surprising, given its long journey to the north. Based on an earlier picture, the B-15Z in October 2017 was located to the south. He swam about 3/4 of the distance along the coast of Antarctica and got into the Southern Ocean, heading further north from the tip of the Antarctic Peninsula. The currents did not allow the iceberg to pass through the Drake Passage; instead, the B-15Z sailed north to the Arctic Ocean. In May 2018, when the picture was taken, the iceberg was about 278 km northwest of South Georgia. The icebergs that reach these territories are known to quickly fade, here their life cycles come to an end. 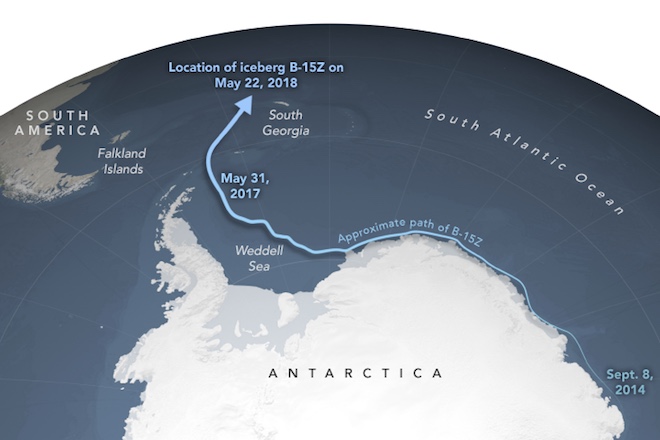 As previously noted by NASA glacier Kelly Brant, icebergs that are so close to the equator are usually filled with water, which then spreads over them, as if cutting into pieces.