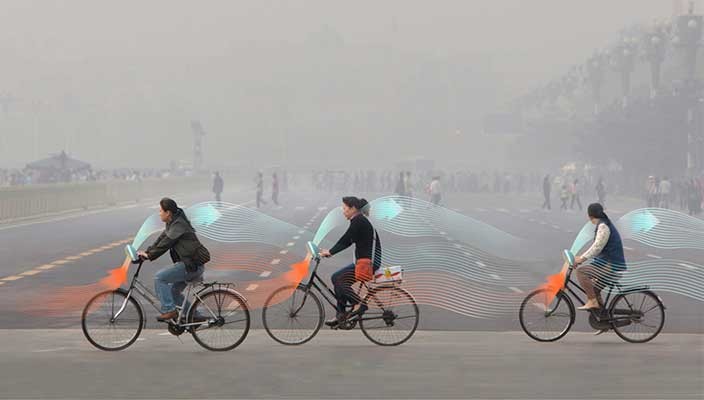 Cabin filter in the car has long been surprising. It ensures clean air in the cabin, regardless of the weather conditions, the amount of dust on the street and the level of pollution of the city. However, cyclists and motorcyclists can only dream of a clean air in the city. They could have been more accurate, since the Dutch artist and inventor Daan Rozgard came up with a way to solve their problem, globally, for all residents of megacities inhaling dirty air on the street.

A talented artist is engaged in a mission to solve the smog problem in the most polluted cities in the world for several years. His studio developed an innovative concept of the bicycle, dubbed The humble bicycle. The main structural feature of such a bicycle is the presence of an air filter, which during the movement begins to flow through itself natural air streams, blowing the biker’s face with purified air.

Also, bicycles with air filters have not only a local effect on cyclists, but also global, purifying the air in the city as a whole. The bicycle remains a common means of transportation in Chinese megacities: only in Beijing does the total rolling stock of bicycles exceed 1 million units. It is easy to imagine the impact that they will have on the ecosystem of megacities, when they begin to be used daily in such quantities.