The development of asteroids will help make the planet cleaner 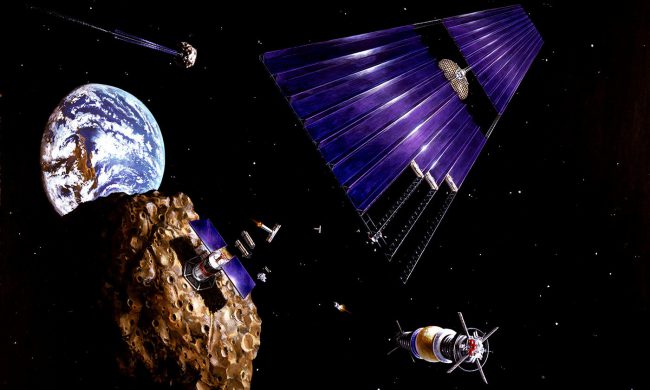 The extraction of useful materials on asteroids may seem like something out of the ordinary, but in fact, companies and even some governments are already seriously considering this possibility. Why not: in comparison with the colossal technical problems that have to be solved on the Earth, under the conditions of our gravity, on the asteroid everything will be much easier, on a smaller scale, in high concentration and with the simplest technological solutions. It remains to be hoped only that the development of asteroids will begin quickly enough to solve the problems with the resources that the world has encountered right now.

Scientists work with companies that plan to develop asteroids in order to accelerate the onset of this future. Due to the secrecy of the individual data, they can not tell much about it – a commercial secret. Nevertheless, the main reasons for optimism and what this can mean for our future – they are talking about this quite openly.

Many people are skeptical about the extraction of resources on asteroids, because they think that the task of all this is to return platinum on the market. The media confidently declare that a platinum asteroid can cost trillions of dollars, but anyone who has a basic understanding of economic realities will say that the appearance on the planet of a huge reserve of precious metal will simply bring down the market, thereby reducing the value of the asteroid.

On the other hand, if the plan is to produce platinum in small batches, while maintaining a high cost (as in the case of diamonds, for example), how then will the asteroid miners compete with earth miners who are already benefiting from the existing supply chain and transportation?

That is why platinum is not the goal of space miners. The first product from asteroids will be something less obvious: water.

For rocket scientists, water is the raw material for fuel. Running water from the Earth into space requires a lot of fuel, because of which the whole concept becomes questionable and closed. Fortunately, there is a lot of water in space and it is easier to move it. Water can be extracted from clay minerals on common small bodies – carbonaceous asteroids. After separation from the minerals, water can be separated by electricity (in the process of electrolysis) into hydrogen and oxygen, and then used in rocket fuel.

The production of rocket fuel in space will reduce costs for all other processes that take place in space, facilitating the launch of the supply chain cycle and the extraterrestrial transport chain. However, before this happens, it is necessary to find operators capable of starting the process.

Who will buy rocket fuel made from asteroid water? One of the concepts is to sell it to telecommunications companies to launch satellites into orbit. Ten years ago, most satellites were launched with rockets attached to a small upper stage. She led the satellite into a geotransport orbit, which lies at the lowest point 200 kilometers above the surface of the Earth and at the highest – by 36,000 kilometers. The spacecraft is aiming at the highest point, the satellite is released and begins to transmit data to users. The cost of the spent upper stage, however, is quite high.

Today, most satellite owners place a small electric motor on the spacecraft. It is cheaper and more efficient, but very weak. It takes six to twelve months for the satellite to reach the final orbit. Time is money, so this delay costs the satellite’s owners hundreds of millions of lost profits.

The development of asteroids will provide a third option. The development company will sell water to a space transportation company that will use it to refuel a space barge parked in Earth’s orbit. The barge will dock with the launched satellite in the geo-transfer orbit and take it to the final orbit during the day.

According to the calculations of scientists, the cost of this service, including the return of capital, financial expenses, insurance and profits for all parties, will be less than the lost profit in modern realities, which means this is a business case. The only problem is to find enough customers who are ready to use this service.

And space agencies like NASA can help here. If they develop a refueling repository in space to reduce their costs of developing the Moon or Mars, and if they sign commercial contracts for the supply of space water, they will reduce capital investment and risk for new extractive companies. In some ways, government agencies can provide early success to the private space industry.

Infrastructure for the development of asteroids will help to solve a serious problem concerning resources. In ten to twenty years, the current system of satellites and fiber will not be able to cover the need for the transmission of wireless and Internet data. There are no solutions so far, except for the creation of antennas in space that are too large to be sent on missiles, because there is nothing that can be scaled quickly enough to meet the data transmission needs, the volumes of which will grow exponentially until the end of the century. Metal from asteroids will not be sold on Earth, because it is too expensive. It will remain in space, helping to transfer valuable data to the digital market.

There is also an opinion that the generation of solar energy in space in this century will be cheaper than the generation of energy on Earth by any known method. Then this energy will be transferred to the ground with the help of microwaves. Moving much of the energy sector in space will free the planet from environmental problems related to energy production and the supply chain of this energy itself. Even wind and solar energy require the use of huge areas of land.

According to some estimates, the generation of energy outside the planet can reduce industrial emissions by a quarter by 2100. And this is without taking into account the exponentially growing energy volume of production and operation of computers.

Keep in mind that none of these ideas implies the return of the asteroid materials for sale to Earth. The real value of space mining will be to create a space industry that will benefit all of us. The main import from space will be massless photons, transferring data and energy.

An important point that our government leaders must understand is that investing in space mines is a safe bet on our future, one of the safest. NASA and other space agencies will have the opportunity to conduct more research, as well as increase geopolitical presence at a low price. The preservation of the Earth and the improvement of the quality of our life will be simply a pleasant addition.