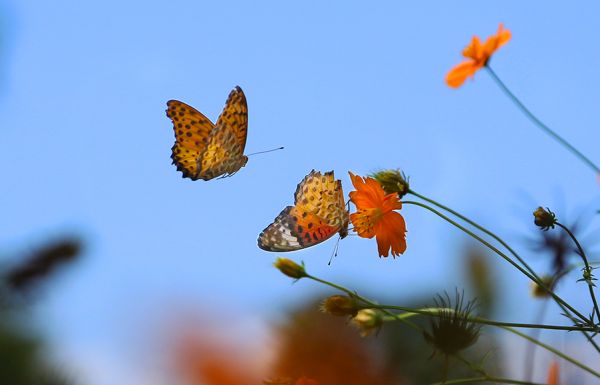 Scientists suggest that warm autumn can deprive insects of access to water or increase the activity of their natural enemies.

Environmentalists from the United States have found that the sharp decline in the number and species diversity of butterflies in the western regions of the United States in the past four decades is mainly due to the increase in air temperatures during the fall. This was announced on Thursday by the press service of the University of Nevada with reference to an article in the journal Science.

“The fact that the number of butterflies is rapidly declining not only in the vicinity of cities, but also in untouched corners of nature in the western United States, once again suggests that we cannot assume that insects are not threatened by anything where there is no man. warming affects all geographic regions equally, “said Matt Forister, a professor at the University of Nevada in Reno (USA), quoted by the university’s press service.

Observations of recent years show that the number of domestic and wild bees on all inhabited continents, as well as many other insects, including butterflies, began to decline rapidly. In particular, over the past six years, the population of wild bees has declined by more than a third, and the number of their domestic relatives in North America alone has more than halved.

Butterflies were struck by similar problems. According to ecologists, the number of many European Lepidoptera, including cabbage, turnip and rutabid, may decline to zero in the UK and some other regions of Europe by 2050. The reason for their disappearance is both human activities and changes in the work of ecosystems associated with global warming.

Professor Forister and his colleagues have studied in detail how this process proceeds in the western United States, and also uncovered the possible causes of the disappearance of lepidoptera, analyzing data that have been collected by professional biologists and two organizations of butterfly lovers over the past 40 years.

Climate threat to butterflies
In total, the participants in these projects were able to track how the number and species diversity of more than 450 species of butterflies inhabiting 11 states in the western United States was changing at that time. By analyzing and combining these datasets, scientists calculated the rate of growth or decline of populations of these insects and compared them with how the ecological and climatic conditions have changed in the regions where these butterflies live.

These measurements showed that populations of virtually all species of Lepidoptera have been declining steadily over the past several decades, in some cases declining by 20% or more over the entire observation period. In most cases, the main reason for their disappearance was various climatic factors, and not pesticides or other manifestations of human activity.

Most of all, as Professor Forister and his colleagues note, the autumn climate influenced the condition of butterflies. Any increases in temperature during this season of the year led to dramatic reductions in the abundance of virtually all species of Lepidoptera. The exact reasons for this are still unknown, but scientists suggest that warm autumn can deprive insects of access to water or increase the activity of their natural enemies.

Further observations of butterflies, as scientists hope, will help them uncover the mechanism of action of global warming on their populations and understand how they can be saved from complete extinction in the coming decades.