The drying of the seas increases volcanic activity

Rapid shallowing of the Mediterranean Sea a few million years ago reduced the pressure of the earth’s crust in the region, because of which volcanoes erupted twice as often and more intensively.

Five million years ago, the most unstable period in the history of the Mediterranean Sea, lasting for a million years, ended – the Messinian peak of salinity. During this time the sea managed to dry completely and again to fill with water eight times. In the most dry periods, the territory now hidden under the water was a giant salt marsh, possibly with three or four large lakes.

It all began because of geological activity in the shallow strait region that separated the Mediterranean from the Atlantic to the formation of Gibraltar. The bottom of the strait rose above sea level, and the latter was cut off from the World Ocean. The Mediterranean Sea was melting and evaporating slowly (for thousands of years). River runoff did not compensate for evaporation. 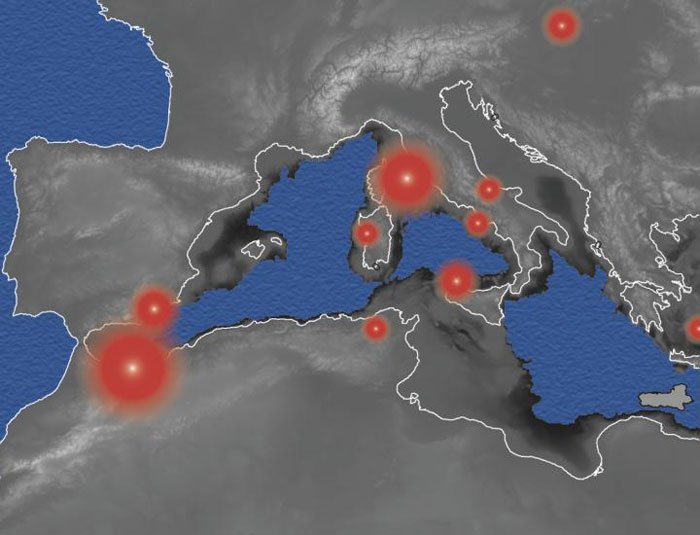 The white line is the modern coast of the Mediterranean Sea. Red punchons are volcanically active areas. The size of the punson shows how active volcanoes in the area in the Messina peak salinity differed from the calculated.

The water left, and the pressure on the earth’s crust significantly weakened. This, according to the assumption of geophysicists from the University of Geneva, could stimulate the release of magma to the surface. Scientists argue that a sharp and significant (in absolute terms) decline in sea level could be the cause of increased volcanic activity in the Mediterranean. The volcanoes of this region erupted almost twice as often as one might think

The mathematical model created by scientists shows how changing the water load changes the pressure of rocks on the channels through which magma rises to the surface. Colleagues of Swiss geophysicists note that the study offers a new perspective on the relationship between climatic and geological processes.