The era of war drones 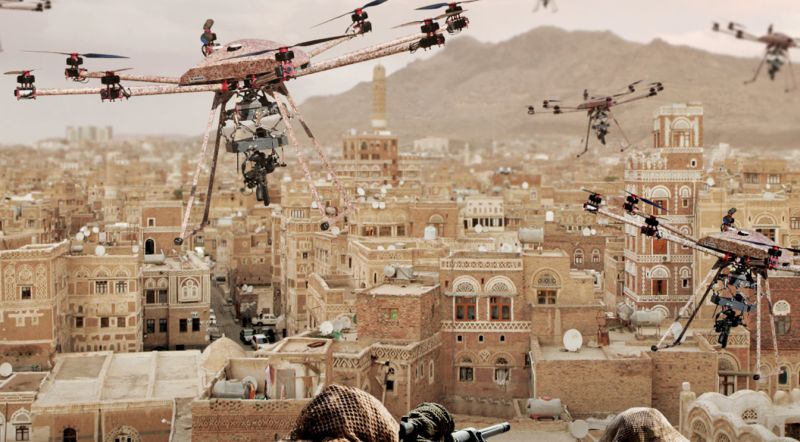 TIKAD, a combat flying drone of a new generation, is capable of carrying both a large-caliber sniper rifle, a machine gun, and even a grenade launcher! With its advent, scientists proclaimed the beginning of a new era – the era of war drones.

In the US, a new type of drone-killer – TIKAD. It does not look like other battle drones, which recently had a fair amount of nagging. Unlike the effective, but cumbersome and awkward MQ-9 Reapers, a new drone can be flown aboard a sniper rifle, a machine gun and even a grenade launcher – a good arsenal for a robot, right?

Control over the “Reapers” and their predecessors, “Predators”, is carried out from a distance of thousands of kilometers, and the field of view is 1.5-3 km. They strike with AGM-114 Hellfire laser guided missiles – accurate but completely unsuitable for city missions, since civilians may suffer during the explosion. For similar tasks you need something more subtle: for example, if you need to quietly remove the sniper from the height he occupied, then it is absolutely not necessary to cover the whole area with volley rocket fire.

Old ideas in a new way

That’s where TIKAD comes to the scene. The new drone, acquired by the Israeli army, will be the first of its kind, despite the fact that the idea of ​​using small armed drones has existed for several years. Back in 2012, the US Navy was experimenting with equipping quadrocopters with shotguns as a means against snipers, but this venture had to be abandoned. What really came into being is the SwitchBlade, a portable kamikaze drone carrying an explosive charge and capable of flying over distances of up to several kilometers.

Of course, not only the US Army studied the possibilities of using drones in combat. In 2015, IGIL, a terrorist organization banned in Russia, sent a bunch of drones-bombers into battle in the battle for Mosul. These military vehicles, assembled on the basis of conventional quadrocopters, which can be bought at any electronics store, were able to hit targets from a height of several hundred meters, dropping on them bombs – modified 40-mm grenades. The US Army was able to stop them only with the help of EM silencers, expensive devices with a limited range.

The drone-drone itself is very simple, but the drone-sniper already requires filigree engineering work. Little Copters can not even lift a heavy rifle, but now the designers have created a whole range of super-powerful models capable of carrying loads weighing up to 18 kg – this is more than enough. Be that as it may, there is still a problem of stabilizing the rifle and a strong kickback, capable of literally deploying the copter in the air.

How it looks in practice, demonstrated a notorious clip on Youtube. As a result of giving back, the drone knocks down the tip and is deprived of the right to a second shot, which makes it very impractical. In response, Duke Robotics Inc., the creators of TIKAD, says they have “a unique solution to stabilize the drone and suppress recoil.” The weapon is mounted on a robotic cardan that rotates in real time, holding the barrel in the desired direction. The energy of recoil is distributed by means of flexible plates, which allows to minimize (but not eliminate) the displacement. As a result, we have an effective, but not an ideal system, so to a professional sniper the drone is still far away. But is the rifle always the best option?

The rockets are large and small 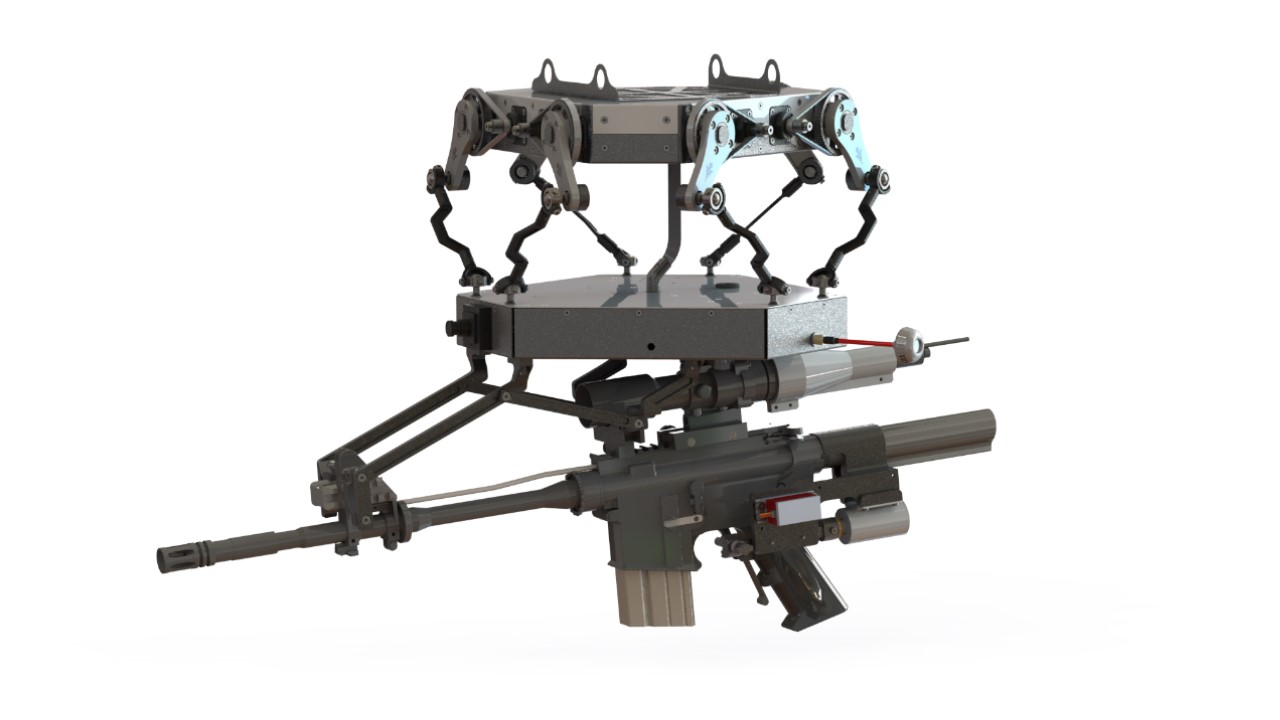 Stabilization drive shaft Duke Robotics. Six manipulators of the gun platform are moving to compensate for the return.

Another approach is to use weapons without recoil, for example, an old-good rocket launcher. Instead of large-sized rifles, the drones are armed with rocket clusters capable of quickly releasing a swarm of projectiles for the intended purpose. But we, in fact, started our story by saying that such a tactic is not good for a city robot-killer, is not it?

The thing is that the combat installation can be made much smaller than the same helicopter missile unit. In the 1960s, the Gyrojet pistol made it possible to reach a striking force like the .45 caliber, firing 13-mm bullets the size of a bullet. A few examples of this weapon were used in Vietnam, one even lit up in the James Bond film, but the story of the rocket-launcher ended here: the weapon was too inaccurate for a real fight. Weapons experts, however, assure that a modern version of such a device can be much more effective. “The inability to drill four cone-shaped corner holes at the same angle consistently, was the main reason for the lack of precision in Gyrojet, and now the CNC machine will cope with this task in a few seconds,” writes Mel Carpenter, author of An Introduction to MBA Gyrojets and Other Ordinance .

According to Carpenter, it is miniature rocket launchers that will become the main weapon of the drones of the new generation. Duke Robotics Inc. In turn, they achieved some success by experimenting with a rifle variant. According to DefenseOne, in 2015 the company supplied the Israeli special forces with a sniper rifle mounted on a commercial unmanned aerial vehicle, which was successfully used in combat.

The future of the war of drones 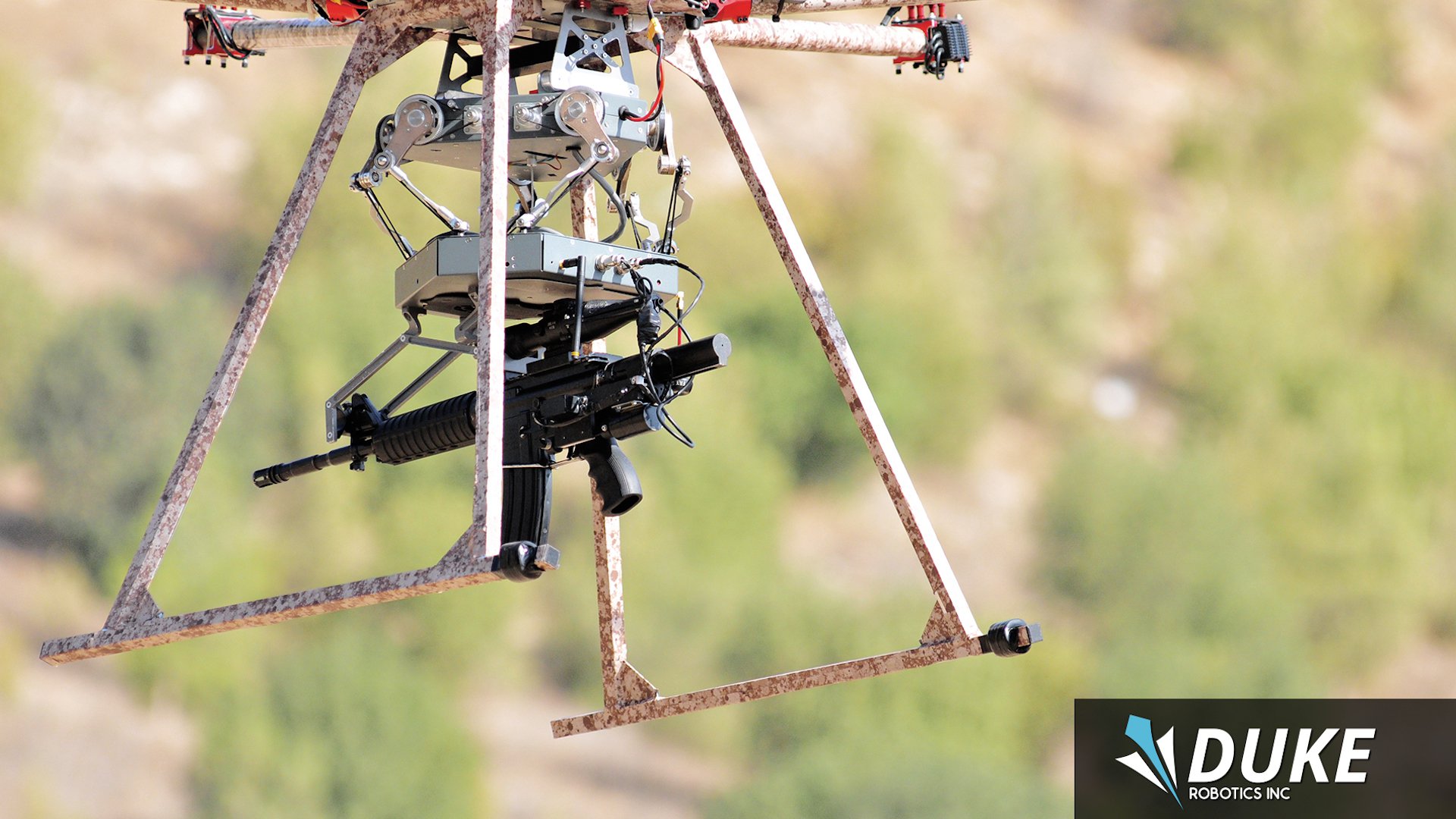 The TIKAD developers’ slogan is “no boots on the ground”, and the new generation of drones has come as close as possible to flying drones performing their tasks with the effectiveness of human fighters. Among the other drones, the quadrocopter distinguishes mobility: they can cross any terrain in the shortest possible time, are able to detect the enemy on high-altitude positions and can themselves carry out reconnaissance from the air. Of course, not everyone is happy with this: in the public there are more and more campaigns against unethical use of robotics. Initially, TIKAD was designed to carry out missions in critical situations where an ordinary person could not cope or was exposed to an unreasonably high risk; But it is clear to everyone that very soon the drones will become a mass phenomenon and, with the increase in the level of technology, they will gradually displace people from military operations.

Bonnie Docherty, a law professor at Harvard Law School and a senior research fellow at the Human Rights Watch Arms Division, is concerned that TIKAD represents a step toward autonomous weapons that chooses its goals without any human understanding of legal, moral or social norms. The UN is moving towards an agreement to limit such weapons, but does so at its own, very leisurely pace.

TIKAD causes alarm among many experts, and this is not a joke. Yes, now it is managed by the operator, but eventually the drone will most likely move to a completely autonomous mode. Whatever it was, the practice showed that the future of the war of drones over small, mobile UAVs – they are much more numerous and efficient than their larger analogues. Drone-killer drone is no longer science fiction: the era of the robot war has already come.