The evolution of life on Earth has been revised 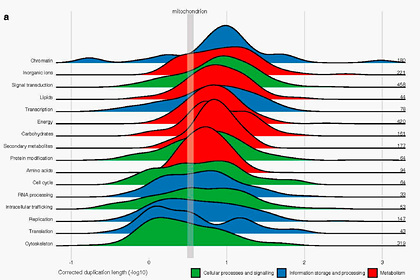 Scientists at the University of Utrecht in the Netherlands and the Institute for Biomedical Research in Barcelona (Spain) have revised the mechanism of the first eukaryotic organisms. It turned out that the evolution from simple bacterial cells to complex eukaryotic cells proceeded differently than previously thought. The researchers presented their findings in an article published in the journal Nature Ecology & Evolution.

As the authors of the scientific work write, the first cell that acquired mitochondria (it is called LECA – last eukaryotic common ancestor, or “the last common ancestor of eukaryotes”) already possessed the structure and functions of a eukaryotic cell. Earlier it was believed that it was the acquisition of mitochondria that was the key step in the development of the complexity of living organisms (all multicellular organisms are eukaryotes). To find out what changes actually contributed to the emergence of the eukaryotic cell, the researchers analyzed the genomes of modern species and reconstructed the evolution of DNA.

It turned out that prokaryotes became more complex through genetic mutations, duplications (duplication of genetic material) and the acquisition of genes through horizontal transfer (from cell to cell). Scientists have found that through duplications, the genome of prokaryotes has doubled. Families of genes such as GTPases, kinesins, and proteins that coat vesicles (intracellular vesicles) have expanded. As a result, prokaryotes acquired a complex intracellular signaling network, a vesicle transport system, and a developed cytoskeleton.

According to the results of the study, ancient archaea, related to the recently discovered supertype Asgard, created internal symbionts belonging to alphaproteobacteria and later turned into mitochondria. According to scientists, it was the improved cytoskeleton and transportation system that could allow cells to absorb future mitochondria through primitive phagocytosis. In turn, mitochondria supplied cells with an excess of energy, which was used to further complicate living organisms.