The existence of an unlikely evolution 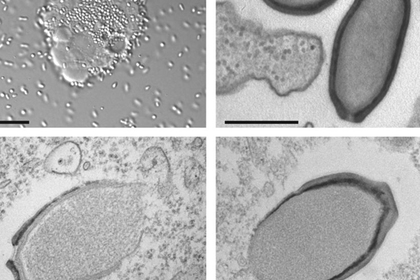 French biologists from the National Center for Scientific Research (Paris) found that giant viruses related to the genus pandoravirus (Pandoravirus) are able to create new genes from scratch, which is considered a rare and unlikely evolutionary phenomenon. The article of scientists is published in the journal Nature Communication.

The researchers analyzed and compared genomes, transcripts (a set of DNA transcripts) and protein composition in all six pandoravirus species. It turned out that 82-87 percent of the genome underwent a transcription process (RNA synthesis on the DNA matrix), but only 62-68 percent carried information on the structure of proteins, that is, they were coding.

The results of the analysis also showed that genes specific for clades (groups having a common ancestor of organisms) and strains had similarities with both non-coding intergenic gaps and with the universal genome, that is, the set of genes that each strain possesses.

This is due to the fact that these genes randomly emerged from non-coding regions, but under the influence of natural selection they became similar to genes that are characteristic of the whole family of viruses. Such an evolutionary scenario, according to which new coding genes can appear from scratch, and not be copied or transferred from other organisms, has long been considered statistically unlikely, but recently it is confirmed by the results of studies of the yeast genomes, fruit flies, Tal’s reticular species, mammals, including primates