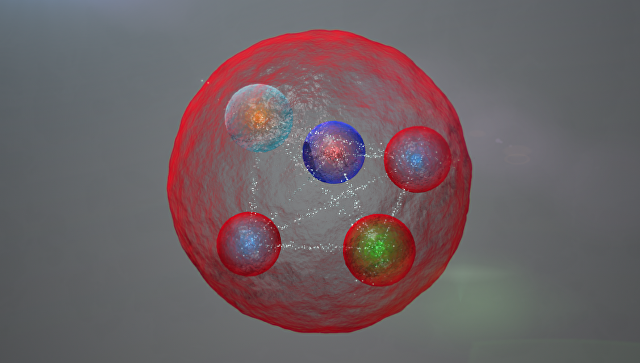 Fresh observations on the LHCb detector from the ring of the Large hadron Collider (LHC) have confirmed that pentaquark devilish particles of five quarks – actually exist.

According to modern representations, all elementary particles consist of small objects that physicists call quarks. Protons, neutrons and other heavy particles called baryons contain three quarks. Their smaller cousins, the so-called mesons, contain two elements – the up quark and the antiquark, the basic component of antimatter.

In principle, existing physical theories do not exclude the possibility that there may exist elementary particles, consisting of four or even five quarks of different flavor or a color. More recently, scientists began to find evidence of the existence of such particles, tetraquark and pentaquark.

For example, in July last year, physicists at CERN said that the data collected by the LHCb tool during the first phase of the work TANK, they managed to find signs of the existence of two pentaquark — Pc(4450) and Pc(4380) .

Despite the high degree of confidence in the opening nine Sigma, many physicists doubted whether these devilish particles actually. The fact that a number of scholars have suggested that in fact they represent a kind of molecule from one baryon and meson, not a single particle of the five quarks. The authors themselves open too allow such a possibility.

Using new and old observations made with the LHC, LHCb collaboration re-analyzed the data collected by its detector, and showed that pentaquark Pc(4450) and Pc(4380) do exist and that lambda particles, the decay of which they are formed, can not be converted into the final products of their decomposition, bypassing the stage of decay of the pentaquark and one meson. This meson, as shown by new data from the LHC obtained in the past and this year can be not only Cass, wrote scientists in the past year, but another type of meson, the pion.

Confirmation of the existence of pentaquarks and the recent discovery of a whole family of tetraquarks, as well as the detection of the anomalies in the decay of B-mesons that do not fit the predictions of the Standard model of physics, as scientists believe, allow us to hope that new physics will be opened at the LHC in the near future and that we will not have to wait for the construction of new supercollider with the energy of the collisions in 100-140 TeV, physicists spoke at the recent conference ICHEP in Chicago.