The extraterrestrial landscape of the Chanelld-Skablands plateau 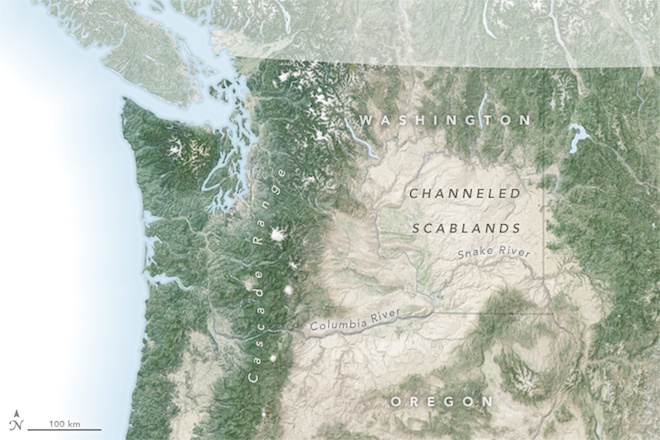 Landscapes of the Columbian plateau in the east of Washington more resemble another planet than Earth. Among the towering cliffs and descending depressions lie boulders scattered over the landscape, the bedrock crosses the bends of the canals. For geologists, this region called Channeled Scablands is valuable in that it can tell a lot about past extreme floods. 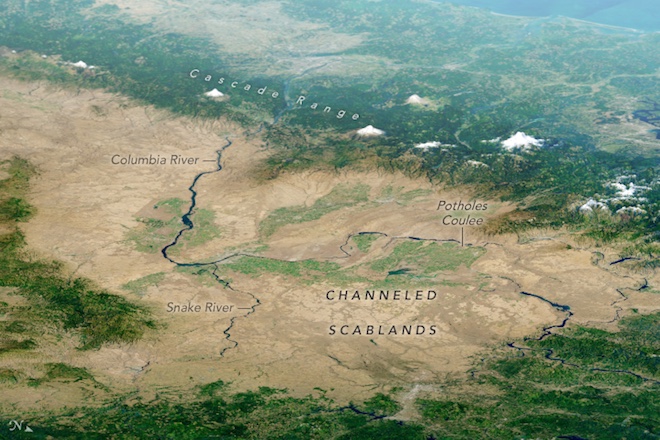 The network of channels is shown in an image composed of images obtained between 2013 and 2018 using the OLI tool on the Landsat-8 satellite. Clouds and fog were removed thanks to a special technique, then topographic data was added to NASA’s mission to obtain data from the digital elevation model SRTM (Shuttle radar topographic mission).

Although the channels look dark brown against the background of bright surroundings, they do not have moisture. The rivers of Snake and Columbia filled with water are much darker in comparison with them. Dark color is given to them by volcanic basalt, exposed as a result of the destruction of the upper layer of sedimentary rock.

The large prehistoric floods that formed this landscape are not fully understood by scientists. Geologist J. Harlen Bretz in 1923 proposed a description of how water could create this relief. “Chanelld-Skablands is an erosive trail of huge, highly graded glacial streams. The magnitude of the changes caused by these flows is striking, “he claimed. But for decades, his explanation has remained the subject of scientific debate.
Since then, scientists have gained a clearer picture of the events that occurred during the last ice age from 10,000 to 20,000 years ago. When the edge of the Cordillera Ice Shield moved south, it formed an ice dam towering 600 meters along the Clarke Fork River. The glacial lake of Missoula grew beyond the ice dam and as a result, it accumulated as much water as in the lakes of Erie and Ontario combined. When the dam collapsed, more than 2,000 cubic kilometers of water spilled across the region at a speed of about 130 km / h. The dam grew and collapsed several times, and repeated floods left furrows, potholes and long channels. 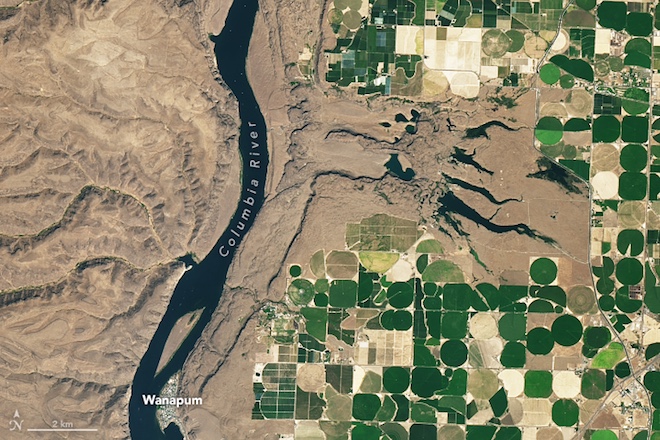 In September 2017, the satellite Landsat-8 received a detailed snapshot of the canyon Potholes Coulee. This horseshoe-shaped canyon was formed when floods swept a section more than 260 meters wide and 5 kilometers long from the Quincy Basin to the Columbia River valley, eroding the topsoil and destroying basalt. In our time, irrigation networks that take water from the Columbia River contribute to the development of agriculture on this rich soil.