The fences of the future can be kept in the apartment 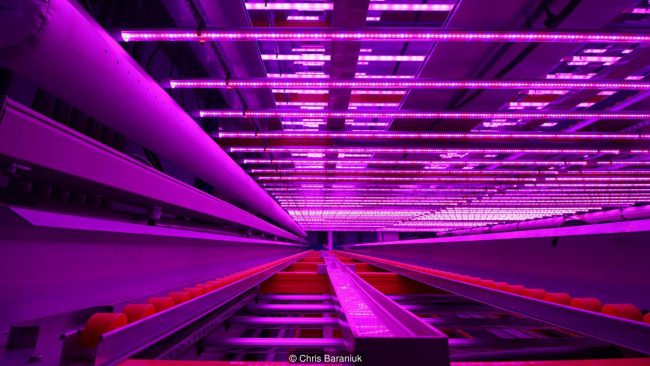 Instead of growing crops in sun-drenched fields or in greenhouses, some companies store and grow it in dark, old pantries under ultraviolet light – which allows them to save water and quickly reap the benefits. At an old carpet factory on the outskirts of the Belgian city of Kortrijk, an agricultural coup is being prepared: to grow the crop in a building, and not on a farm, collecting it layer by layer under colored bulbs in an area the size of a small apartment.

This is called a vertical farm or vertical farming, and several companies have been doing this for about ten years, leasing old warehouses and unused factories and building structures on them that grow vegetables and grains in tight, artificially illuminated rooms with warm sunlight.

One such company is Urban Crops. It has a large frame designed to hold trays with slowly moving conveyor belts of young plants under gently glowing blue and red LEDs, in this former carpet factory.

But their system, mostly automated, is still under development. Chief Executive Officer Martin Vandekryus explains that their equipment allows plants to eat light and nutrients throughout their growth cycle. Then they can be collected when the time comes.

Each type of crop has a growth plan adapted to its needs, for example, in nutrients and light. In addition, plants grow faster here than on open farms. 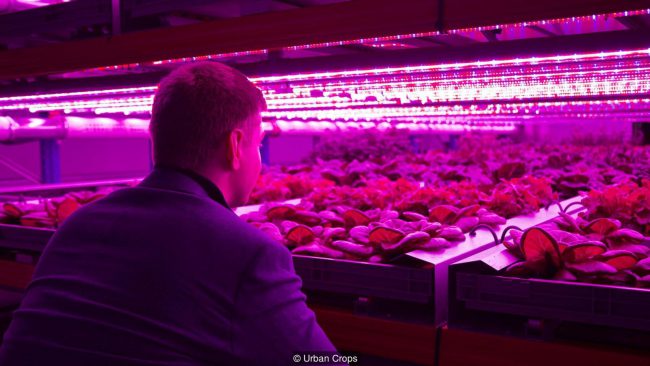 Urban Crops says that vertical agriculture yields more yield per square meter than traditional agriculture or greenhouses. Vertical agriculture also consumes less water, plants grow faster and all year round – and not just at certain times of the year. Objects can also be built, theoretically, anywhere.

In Urban Crops, eight layers of plants can be folded into an area of ​​only 30 square meters. While this is not a full-scale commercial project, but a test that should show the viability of the concept.

“In principle, inside the system, every day is a summer day without a cloud in the sky,” says Vandekryus.

But can you grow anything if you have the right technology? 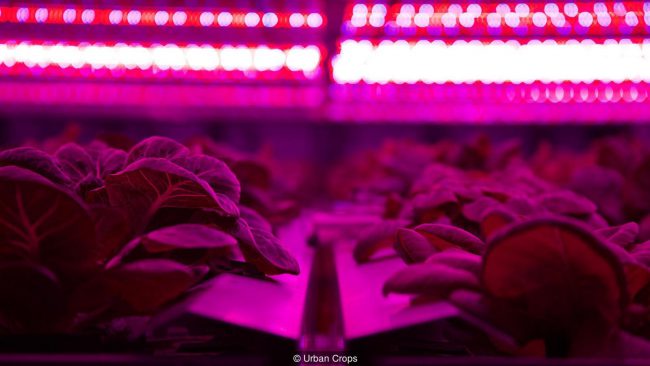 Vandekrus says that almost anything can be grown inside – but that’s not always a good idea. He explains that it is more economical to adhere to more rapidly growing crops that have a high market value. Herbs, greens for salad and edible colors, for example, bring much more per kilogram than some of the root crops that are most likely to be grown outdoors in the old manner for some time.

Growing plants indoors, you get precise control over the resources your crop needs. This allows plants to grow in a predictable and carefully controlled manner. LEDs, for example, can be turned on and off at will, because they do not emit much heat, like “Ilyich’s bulbs” and they can be brought closer to plants for optimal light consumption.

Of course, you can produce the same number of vegetables and on “freedom”, but this will take more land and resources.

So, how does this work in reality? There are several basic models of closed agriculture, of which a vertical farmer can choose: hydroponics – when plants are grown in a nutrient-rich swimming pool with water – and aeroponics – when plant roots are periodically sprayed with fog containing water and substances. In the latter case less water is used, but there are more technical problems. There are also aquaponics, which is a bit different, because it includes fish breeding, which helps to cultivate bacteria, which are then used to feed the plants.

Urban Crops chose hydroponics. Vandekryus notes that they process the water several times after it evaporates from the plants, and draw it out of moist air. It is also treated with ultraviolet light to prevent the spread of disease. 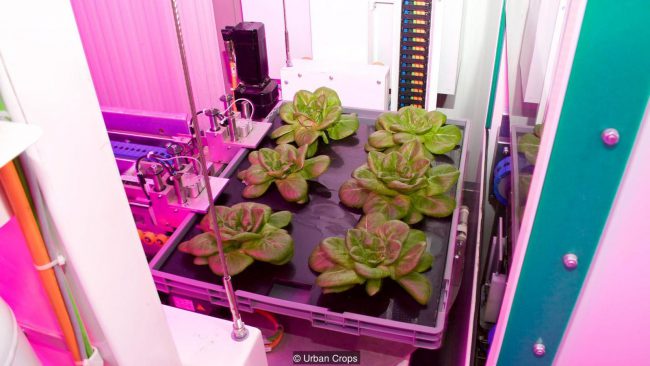 Perhaps the key advantage of vertical farming is that it uses much less water. “We made a valuation with lettuce leaves and realized that we are reducing water consumption by 5%, compared to traditional growing in the fields,” explains Vandekryus.

But Urban Crops does not plan to earn on the sale of crops. He plans to make money selling his vertical farms.

He developed growth systems as a product in itself – people can buy them to grow food in relatively limited spaces – and perhaps this will allow the farm to move to urban areas or complexes, such as campuses. This installation can also be installed next to existing production lines on greenhouse farms.

One of the biggest names in the field of vertical farms, however, has another business model. AeroFarms are located in New Jersey, the United States, and opened, they said, the world’s largest covered vertical farm with a total area of ​​7000 sq.m. The company hopes to produce tasty greens in large quantities.

Ed Harwood is an inventor and expert in agriculture who came up with a technology that made this possible. He came to this idea several years ago while working at Cornell University, where aerial systems were used to grow plants in the laboratory. Why is this approach not used on a larger scale, then he asked himself?

“I asked: how did this happen? People said: oh, do not make money on it, the sun is free, the light is expensive and all that, “recalls Harwood.

This state of affairs did not suit him. After much experimentation, he devised a system and a nozzle design for spraying aeropone fog onto the roots of his plants. In AeroFarms, roots grow through thin tissue, not soil. But the details of how he solved the key problem – how to keep the nozzles clean over time – remain a trade secret.

“Each nozzle bought from the shelf had significant problems,” says Harwood. “I had to do something and came to a decision intuitively.” But he does not tell anyone about him.

Like Urban Crops, AeroFarms pays particular attention to growing fast-growing vegetable salads and herbs. Harwood believes that the demand for such products, grown on the local market in large enterprises, may one day become a feature of urban outskirts. And he also guarantees the crunchiness and freshness that consumers want.

Harwood firmly believes that the business that he and his colleagues have started may be profitable. But there are a lot of skeptics.

Michael Hamm, professor of sustainable agriculture at the University of Michigan, is one such. He notes that vertical farms are dependent on the constant supply of electricity, most of which comes from sources on fossil fuels.

“Why waste this energy to produce a salad if you can get light from the sun?”, He says.

He says that there is simply no economic sense to grow some crops in this way. “At 10 cents per kilowatt-hour, the amount of energy that will be needed to produce wheat will come out at about $ 11 a loaf of bread.”

Once there was a rise in home brewing – would there be an increase in domestic farming?

Hamm recognizes some of the advantages of this approach. If closed systems are well supported, this technology should theoretically give reproducible results with each crop – you will most likely always receive cultures of the same quality. In addition, although a vertical farm is quite expensive, this is a more attractive option for people first entering the agricultural business – they do not have to spend years to figure out how to deal with the vagaries of the sun and seasons. Substitutions for this experience have not yet been invented.

With the development of vertical farming technologies and the likely decline in value, some are betting that people will want to grow their own greenery at home.

Neofarms is a German-Italian start-up that anticipates this. Its founders Henrik Yobchik and Maximilian Richter developed a prototype of a vertical farm the size of a household refrigerator with a freezer.

“We developed it in standard kitchen cabinet sizes,” explains Yobchik, adding that their plan is to make the device available in an integrated or stand-alone design, as anyone would like. People who buy this unit, have to pay for electricity, keep Neofarms clean and constantly fill with water. But in return they will receive the freshest products.

“With plants growing in the system, you know about the conditions in which they grew up,” says Yobchik. “And get fresh, and this is one of the biggest problems with fresh vegetables, especially greens.”

In supermarkets of the future, there may be own miniature vertical farms.

If you choose plants and eat them at once, you get more vitamins and other nutrients that you can lose when packing and transporting. Many consumers already grow grass on the window frame, but this is an inexpensive and ineffective measure. Perhaps in the future it will become an effective and ubiquitous way to feed yourself a crispy salad.