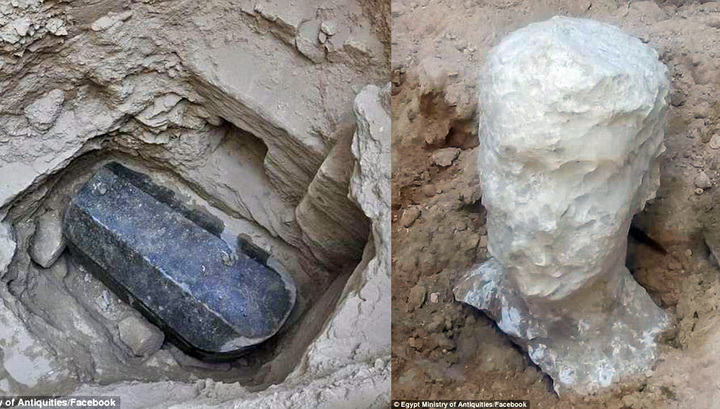 A giant black sarcophagus, discovered on July 1 in Alexandria, archaeologists still uncovered – on the site of the find, without waiting for the transfer to the museum laboratory.

They revealed it, although this week officials promised otherwise and in every way confused journalists: and that the sarcophagus is much older than the Ptolemies and Alexander the Great, and that there is a simple priest there, and not at all a person of royal blood, and that the sarcophagus will first be transported to the proper place and will open publicly in the presence of the world press, and that the mouth of scientists is sealed with state secrets and they can not tell more – but in Alexandria frequent visits of ministers to the place of finding and cleaning up of streets by the military for the passage of equipment in a sack you can not hide, therefore, the operation to open a 30-tonne stone coffin was observed by all those who managed to reach the Sidi Gaber area.

After the autopsy, the ominous and “curse of the pharaons” came to the fore for a short while: the sarcophagus so stank that they could not approach it for an hour, and ventilated the site of the excavations. 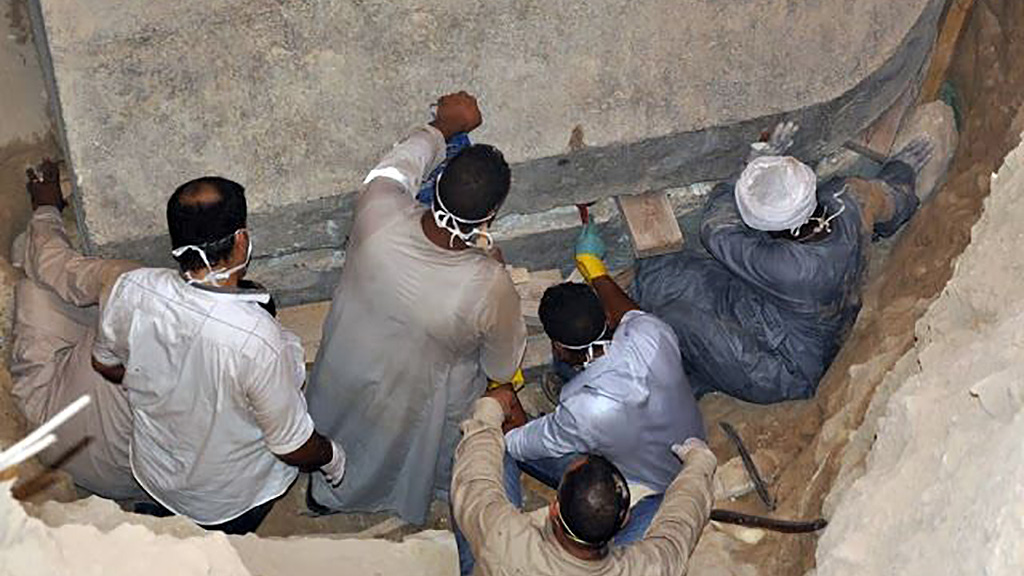 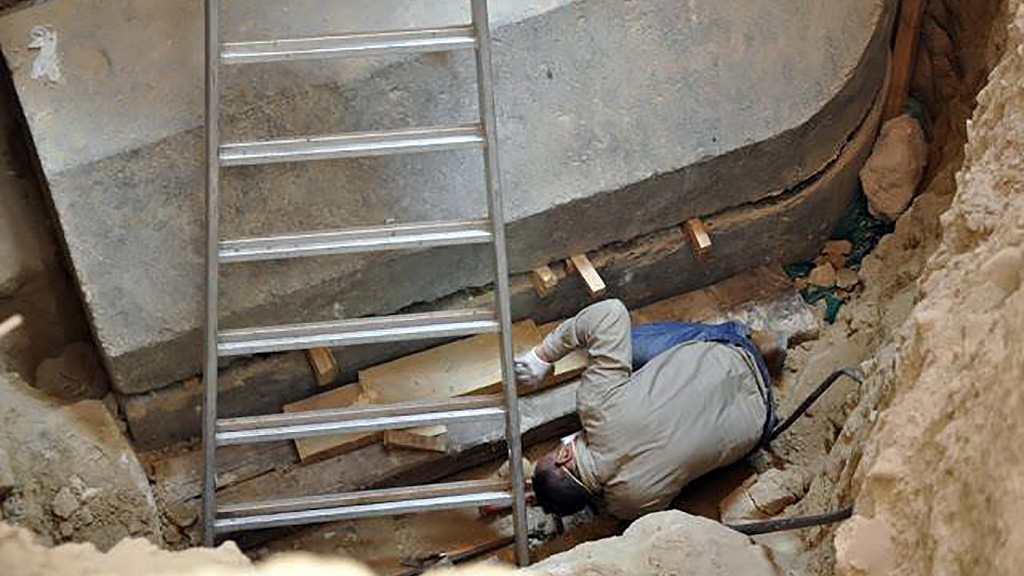 Local TV channels have shot exclusive footage: the worker runs around and over with cans of reddish liquid and pours them straight into the street like slops.

The stinking reddish liquid turned out to be sewage that penetrated the sarcophagus through a small crack and completely flooded it from the inside. At the nearest inspection it was found out that in this ignoble vein the heavily decomposed remains of not one, but three people floated. 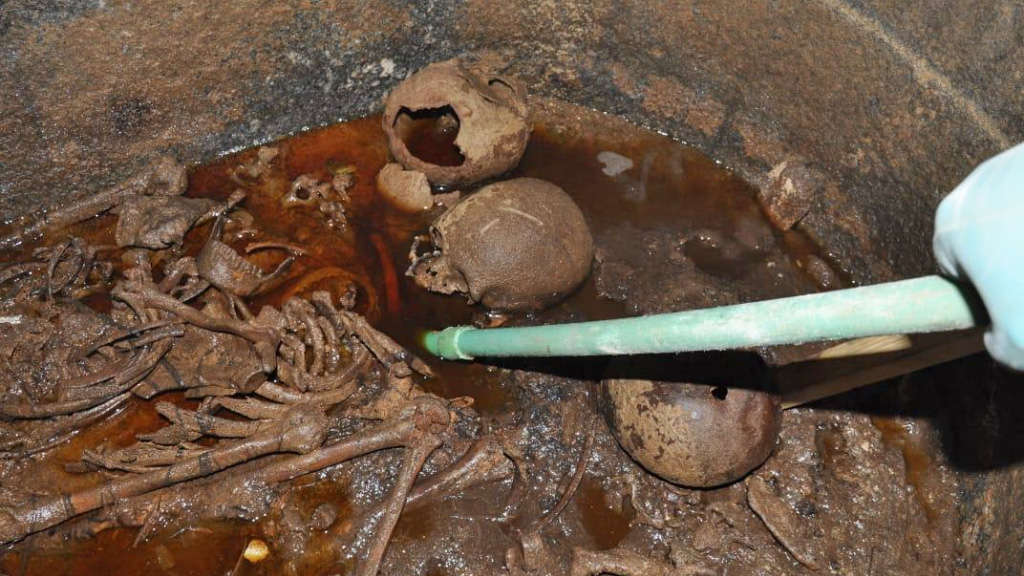 Pumping of sewage from the sarcophagus. Photo: Egyptian Ministry of Antiquities

Nobody expected this: the majestic dimensions of the black granite sarcophagus (265 cm in length, 185 cm in height and 165 cm in width) and the giant white head found nearby, alluded to a solitary VIP burial.

Mostafa Waziri, general secretary of the High Council of Antiquities of Egypt, hastened to note that none of the decomposed bodies belonged to the royal family of the Ptolemies, nor to the noble Romans. The reason for such a statement was the absence of any inscriptions or personal cartridges on the outer and inner surfaces of the sarcophagus.

After the preliminary cleaning of the stone coffin from the sewage that filled it, the archaeologists hoped to find inside the golden (or at least silver) burial masks, ritual figures, amulets or any other allusions to the fact that the three mummies are royal. Recall that at the time of finding the sarcophagus was sealed, therefore, its contents remained untouched from the moment of burial. If nothing royal was found in it now, then it was not originally.

Instead of disappointment and loss of interest in the find (it seems, archaeologists even expected a little) – a new mystery: when recovering the remains of scientists noticed on one of the bones traces of injury – perhaps from an arrow, reports the Independent. On one of the skulls were found multiple cracks, characteristic for a sharp object hit the head, reports Egypt Today. All three sets of remains are evidently owned by men, most likely by warriors, reports Mostafa Waziri. 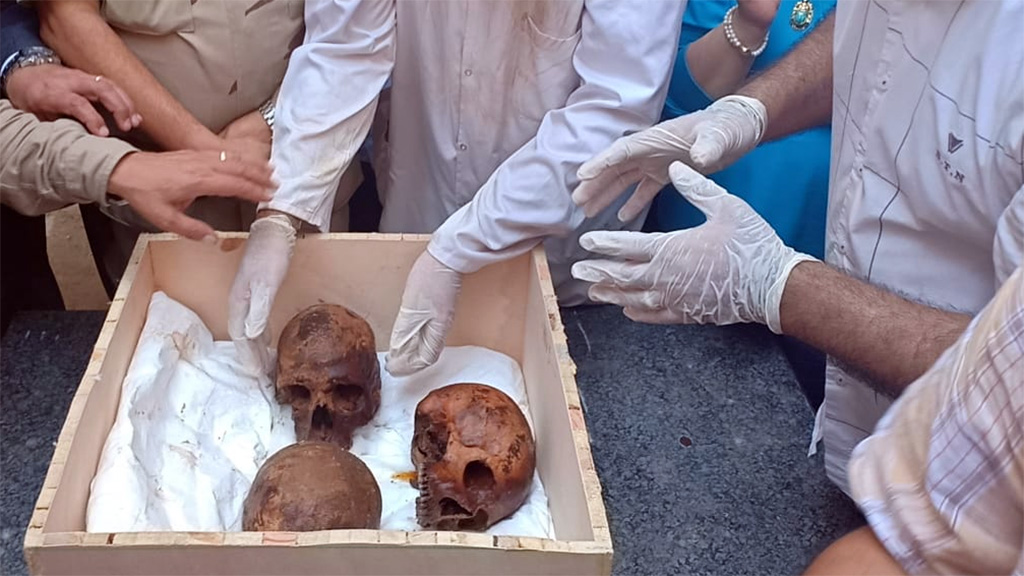 Skulls from the Alexandrian sarcophagus. Photo: Egyptian Ministry of Antiquities

Three people in a giant black sarcophagus, buried incognito, and a giant white head next to the tomb – a new set for lovers of mysteries and mysteries, speculation and speculation, at least until scientists announce official research results.

Not all the reddish liquid from the sarcophagus was poured onto the sidewalk, several samples were taken for analysis. Archaeological and city authorities have promised that the mysterious trinity will be properly studied, and the appearance of the buried – restored thanks to modern computer technology. Determine the exact dating of the burial will also be superfluous, in the light of the statements made about the older age of the sarcophagus and the absence of direct indications of the origin, status and age of men.

The remains will be transported to the Alexandria National Museum, while the sarcophagus will temporarily move to the Military Museum (recall that the headquarters of the northern district of the Egyptian Armed Forces is located in the city of Sidi Gaber, where the find was made).

Further in the adjacent area, they promise to carry out georadar surveys, so as not to miss any other unnoticed antiquities.