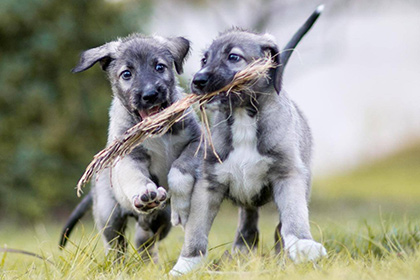 In South Africa it was registered for the first time the birth of two genetically identical puppies, reports the BBC Earth.

According to the vet, he was caesarean bitch Irish wolfhound when he found an unusual protrusion of the uterus. What the doctor believed an excess of amniotic fluid, turned out to be two fetuses attached to the umbilical cord of the same placenta. The team suggested that the puppies can be identical twins. When the animal turned for two weeks, was made a blood test.

It turned out that the dog really gave birth to genetically identical puppies. Small color difference, researchers explain that the activity of the same genes in two organisms may differ.

Although scientists for the first time in the history of veterinary medicine observed the live birth of identical twins, the dog, some researchers believe that this phenomenon may not be as rare. Many puppies from the same litter look very similar, but DNA tests are usually not performed. Veterinarians believe that they managed to find the twins just because of a caesarean section.

Identical twins result from the fertilization of a single ovum that subsequently divides into two (or more) parts. Thus there is a natural cloning, creating two organisms with the same set of genes. Usually genetically identical young animals are born dead from lack of oxygen and nutrients obtained from the placenta.