The first houses on Mars. What they will be? 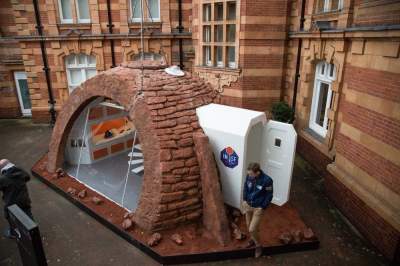 The pioneer settlement on Mars intended for colonialists from Earth who will go to the Red planet in 2033 has been presented at an exhibition in Great Britain on November 10. The exhibition has coincided with the beginning of display of the National Geographic program under the name MARS devoted to the same subject.

Video shows a virtual tour across the Martian real estate below.

The exposition in London is based on consultations with astronomers from the Greenwich royal observatory and the book How We’ll Live on Mars of Stephen Petranek, The Mirror reports.

As building material for a housing estate it is planned to use the Martian soil which will be processed in the microwave oven before formation of a brick. Then will build a needle in the form of a dome from the Martian soil bricks and the processed parts of spacecrafts. Thickness of walls will make about 3 meters, the entrance to the house will represent a double air lock.

To Eagle have to be steady against the severe environment of Mars, including extremely low temperature, influence of micrometeorites, the thin atmosphere and space radiation.