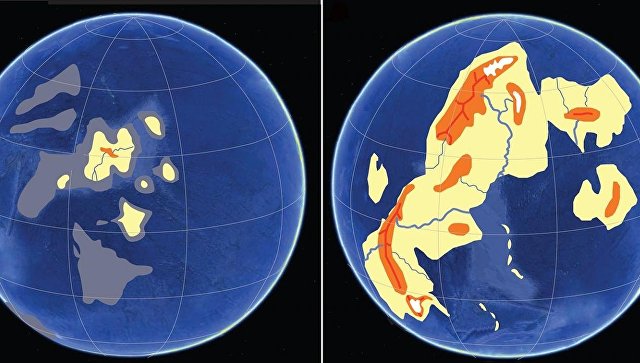 The appearance of the first scraps of land 2.5 billion years ago caused the Earth to reflect more light and heat into space, which led to the gradual freezing of the entire planet and the extinction of the “anoxic” life, scientists found.

“Water practically does not reflect the light and heat of the sun, but absorbs it.When the first continents of the Earth appeared, their rocks were painted in light colors, which helped them to reflect solar energy back into space. As a result, a chain reaction began, thanks to which the Earth first saw the snow, and then turned into ice, “- said Ilya Bindemann from the University of Oregon in Eugene (USA).

The Earth’s atmosphere before the appearance of the first plants and microbes almost entirely consisted of nitrogen, carbon dioxide, methane and other greenhouse gases. Oxygen in it began to appear only about 2.2 billion years ago, after the so-called “great oxygen disaster”, when the first photosynthetic microbes began to absorb atmospheric CO2 and saturate it with oxygen.

As a result, the force of the greenhouse effect has weakened, and, as scientists believe today, about 850-600 million years ago the Earth turned into a kind of “snowball” – the temperature on the planet has decreased so much that its oceans began to freeze to the equator. How exactly the Earth got out of this glaciation, geologists argue until now.

Bindeman and his colleagues proposed an alternative explanation for this phenomenon, studying the primary rocks of the Earth’s shelf formed at the bottom of its primary ocean 3.7-2.2 billion years ago.

These deposits, as the geologist notes, have long been of interest to scientists for the reason that they retained traces of the “pre-oxygen” era, the study of which can help us understand when and why the first photosynthetic organisms appeared, and what exactly prevented them from causing this catastrophe in more early eras.

One such obstacle is considered to be the rocks of the continents – the primary crust of the Earth contained relatively little oxygen, and its rocks could absorb the surpluses of this gas for a very long time. Traces of this process, as noted by Bindemann, his team tried to find in how much “heavy” oxygen contain the rocks of the ancient shelf of the Earth.

As a rule, the more oxygen-17 contain the rocks of the Earth, the more pristine they are. Interaction with atmospheric oxygen, respectively, will lead to a decrease in its share. This allows us to determine the time of “ascent” of continents that were originally located on the bottom of the primary ocean, and the point at which microbes began to produce the first “biogenic” oxygen.

Analyzing the proportions of oxygen-17 in rocks from various parts of the Earth, scientists concluded that this process began about 2.5 million years ago, when the concentration of these heavy atoms in the shelf rocks began to drop sharply.

This means that the continents began to leave the waters of the seas around this time, which coincides with the onset of the “great oxygen disaster”. Such a coincidence, according to scientists, was not accidental, and it was the abrupt rise of the continents that served as a starting point for all subsequent events that changed the face of the planet and the nature of life on its surface.

For example, the formation of continents, according to Bindemann, played a decisive role in turning the Earth into a “puddle”. Their formation in itself reduced the amount of heat that our planet received, and the oxidation and destruction of primary terrestrial rocks saturated the oceans with a large number of compounds of phosphorus, potassium and other important nutrients.

Thanks to this, the first cyanobacteria and algae began to multiply rapidly, which dramatically reduced the CO2 reserves in the atmosphere and led to a gradual cooling of the planet and the beginning of the harshest glacial era in its history.