The first silk appeared in China 8.5 thousand years ago 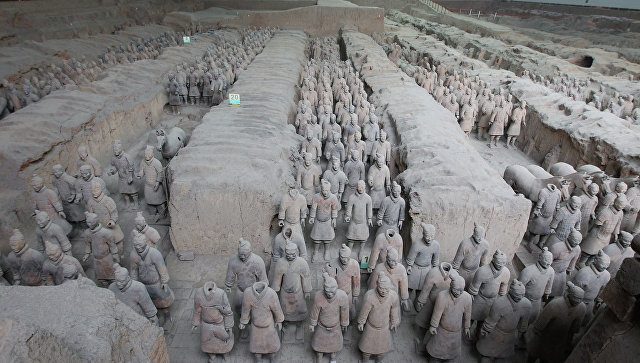 The first silk fabric and the tradition of making silk appeared in the ancient China for 8.5 thousand years ago, as evidenced by the chemical traces of silk in one of the tombs in the village Harbour, ancient sites of people in China.

It is difficult for us to understand how the residents of Harbour used silk, but we believe that they produced silk fabrics in order to bury their dead. This is supported by the fact that the graves we found bone needles and tools for spinning yarn, which suggests that the residents were able to weave silk threads, but also to make them of fabric — says, Decay gun (Gun Decai) from the University of science and technology in Hefei (China).

In accordance with ancient Chinese legends, the celestial Empire has acquired the secret of silk manufacture and weaving of silk in the day when Empress lei zu, wife of the legendary yellow Emperor, Huang di, had tea in the garden under a mulberry tree, and her Cup fell silkworm cocoon. Opening this unpleasant gift, she realized that the thread from which gossip this cocoon, stretches for several kilometers, covering the whole of her garden, and commanded to weave her patterns and fabric.

Gong and his colleagues have uncovered the real, even more ancient roots of the tradition of making silk, which have one common point with the legend – they are near the place where they lived Huang di and Lei zu – in the settlement Harbour in Henan province, the ancient center of civilization in China.

This village is the ancient Chinese was opened in the early 60’s of the last century, and over the years the archaeologists found here the first musical instruments, primitive hieroglyphs and ancient varieties of rice, as well as many other traces of culture, indicating the transition from life in the primitive-communal system to more advanced forms of social organization. According to current estimates, the first people started to live in the Harbour about nine thousand years ago, and seven thousand years ago, the settlement became deserted, leaving behind only the foundations of houses and three hundred tombs.

Studying some of the oldest graves in the Harbour, the researchers analyzed the chemical composition of the soil, trying to find traces of decomposed organics, clothing and other things that can indicate the presence of certain traditions of the ancient inhabitants of China.

To do this, scientists have been dissolving the soil samples and passed them through a sensitive mass spectrometer capable of detecting even the slightest traces of the molecules of organic origin. In the soil of three tombs, built approximately nine and eight thousand years ago, they found traces of a rare graves of the protein fibroin. This substance, insoluble in water or other natural liquids contained in large amounts in the silk of spiders and caterpillars of silkworms.

More recently, Gong and his colleagues found that fibroin may be a very long time to decompose in the soil and hold it for at least three thousand years, even with very small initial quantities of silk. Accordingly, it is possible to say that the fibroin from the graves in the Harbour could get them only in the form of silk threads, or even the fabrics which the relatives of the deceased for some reason, put in the tomb.

Given the age of the burials, we can say that the tradition of the cultivation of the silkworm and at least weaving silk threads existed in Ancient China already 8500 years ago, long before the beginning of the reign of the mythical