The fish-stone found an unusual remedy 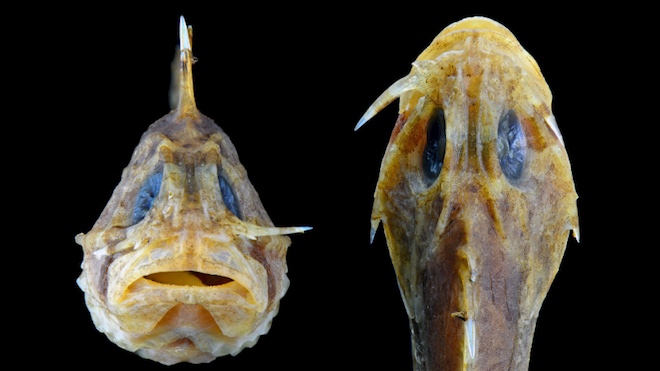 Scientists who have discovered a strange remedy for fish-stones, call it a lacrimal saber. But for predators who dare to contact these well-armed creatures, a unique folding blade means major problems.

“We report the discovery of a protective device in warts or fish-stones, which was discovered during the genetic study of scorpions and their relatives,” a new study of a strange animal published in the scientific journal Copeia reports.

When predators are approaching or trying to eat a stone fish, a bone flap suddenly appears. Scientists at the University of Kansas (USA) who discovered the lacrimal sword say that it can act as a visual deterrent: any fish that dares to swallow a stone fish should be ready for a rather unpleasant surprise. But it is also likely that the folding blade is used in fights between representatives of the species.

About fish-stones, colorful and strange-looking creatures that live in the Pacific and Indian oceans, very little is known. And probably that’s why the team led by William Leo Smith from the Institute of Biodiversity at Kansas University and the Natural History Museum were the first to open the protruding part that no other fish known to science has.

In addition to discovering this previously unknown element, genetic analysis has shown that fish-stones are more closely related to flatfish, sea cocks and scorpion than previously thought. The discovery is based on an analysis of 113 different physical characteristics and 5,280 genetic traits of 63 different species of fish-stones, all of which have a lacrimal blade.

In all species of fish-stones, the blade is located above the cheek under the eye. To release the blade, the fish uses an unusually large number of ligaments and muscles, which are attached to the lacrimal saber.

If the swinging blade does not work, the stone fish can rely on another powerful protection: poison. These fish are one of the most toxic in the world, their poison strong enough to kill a person.