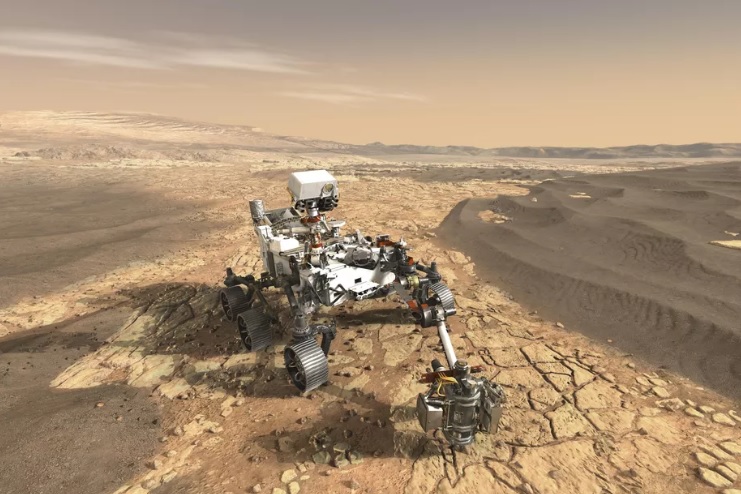 One of the next ambitious steps for NASA’s aerospace agency will be the dispatch in 2020 to Mars of a new rover. The task: collecting samples of the soil of the Red Planet and returning them to Earth. The mission will be the first step towards the further implementation of the ambitious plan for the exploration of Mars and is of high priority among the entire scientific community. The problem is that NASA still does not have a developed “second step”. To date, the agency has not yet figured out exactly how it plans to collect samples from Mars and take them to Earth.

According to the Planetary Society (an American non-governmental non-profit organization dealing with projects in the fields of astronomy, planetary science, space exploration and the popularization of science), which published an analytical report on the current state of NASA’s Mars exploration program, this could turn into a very big problem. In a long-term perspective, the agency was going to explore the Red Planet with the help of artificial satellites, rovers and landing modules. However, in the report, entitled “Retrograde perspective of Mars”, a rather gloomy picture of the future of the program under discussion is clearly emerging. After funding problems that lasted for the last decade, the program was postponed several times, and some of the missions planned within it were simply canceled. And according to the NASA documents, the Martian study after 2020 is waiting for another suspension, since after this date the agency has no official plans. Even in development.

The Planetary Society points out that now is the time to start developing new missions related to our planetary neighbor if the US does not want to lose sight of Mars for at least a few years. To continue the study of the Red Planet, it will be necessary to create a new orbital apparatus that will provide communication capabilities, as well as equipment, through which it will be possible not only to collect, but also to bring the samples of Mars to Earth. And since missions of this scale are usually developed for several years, the question should be taken care of right now, in order to be in time for the implementation phase in the mid-2020s or even 2030s.

Meanwhile, it all looks like new missions can be completely overboard. Given the budget requested by the president of the country for the Congress for NASA for 2018, no one expects the agency to develop new missions related to Mars. However, in the following years the agency may face difficulties in developing new programs. According to Space News, over the next five years the agency will be very limited in funds, while the amount of these funds will not be adjusted in any way taking into account the current level of inflation. From this it can be concluded that when developing new spacecraft NASA, you may have to tighten your belts. And if the situation does not change in the near future, then, according to the Planetary Society, the problem of resolving the issues related to the further space exploration of Mars can be dragged on for several decades for the country.

“Right now, perhaps we ourselves, without knowing it, put ourselves in a very difficult position regarding the Martian program for the 2020s. Too much of everything immediately fell, “- commented Casey Dreyer, director of the department of policy in the field of space research.

“I do not want to witness a situation when all the samples of interest will be found, but they will remain lying on the surface of Mars, because it turns out that we can not send them to Earth.”

According to Dreyer, the most important at the moment is the development of a new Martian orbiter. Because any spacecraft launched to Mars should be able to transmit data to Earth. Now the Red Planet has three NASA orbiting vehicles, but only two – Mars Reconnaissance Orbiter and Mars Odyssey – can be used to transmit radio messages. The technique is becoming obsolete. Both vehicles are near Mars for more than 10 years and have long worked more than planned for their main mission. By the time a ground sampler is sent to the Red Planet, these satellites can already fail and stop operating. Of course, next to Mars are other orbiting devices NASA and other space agencies, but all of them were mainly developed for scientific work. In addition, their orbit is poorly suited for transmitting radio messages, the Planetary Society notes.

This is not only about the technique for collecting and sending samples of the Martian soil to Earth, which will require the availability of a reliable channel for the transmission of messages. Any spacecraft sent to Mars will require a stable communication channel with the Earth. NASA wants to send people to the Red Planet in the 2030s, and for the success of the mission, the agency will in any case have to resolve the issue of creating a reliable near-Martian communication infrastructure.

Several new concepts of orbital vehicles are under consideration at the agency, however, as the Planetary Society points out, there is almost no time left for making a decision.

“To be frank, the development had to start again yesterday,” says Dreyer.

In order to have time to start the device by 2022-2024, it is necessary to revise the agency’s budget for the 2018 financial year. Dreyer would like to believe that the US president will be able to persuade Congress to revert to this issue. There is still a prospect for developing new missions, but the sooner the issue of the required funding is reviewed, the better.

In addition to the new orbiter, NASA needs to at least begin research on the development of technology that will be used to collect Mars soil samples, says Dreyer. The task will also be very difficult. This will require the use of a device that can not only sit down, but also take off from Mars. In addition, it is necessary to think of how to transport samples to the technician lying on the surface.

Right now, NASA faces no less important issues that need to be addressed. The agency still does not have a permanent administrator, and to some extent that is why the National Space Council is planned to be revived in the United States to solve the existing problems in the space industry. It is still unclear the direction of the development vector, which is going to elect the administration of NASA. It may be that the agency generally refuses to explore Mars and will switch to something else. The Planetary Society only hopes that all these issues will be considered in the near future, otherwise it is possible to lose the potential of exploration of outer space for several years, giving this direction to the space agencies of other countries.

“We just want to warn that decisions must be taken now, so that later they do not have to justify themselves with their short-sightedness and inattention. NASA now has a lot of problems, but this one in the long term may have the longest consequences. “