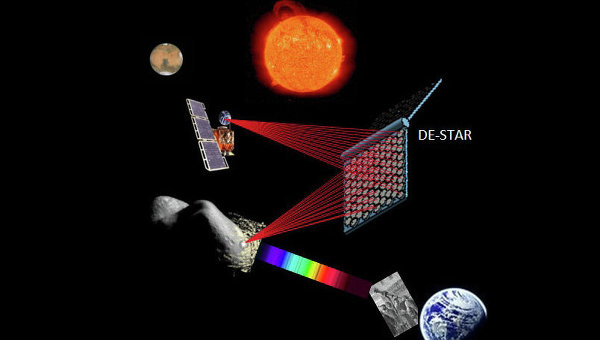 Scientists participating in project Breakthrough Starshot, held last week, the first scientific meeting at which they discussed the prospects of development of the system, which will send the nanoprobes weighing 1 gram to alpha and Proxima Centauri in the middle of the century, according to Centauri Dreams.

I have seen reports in the media, the authors say that Proxima b is a strong candidate for the role of the first targets for interstellar flight. It seems to me that this is not correct – in fact, aim for Breakthrough Starshot has not yet been selected, as it is still too early to make such a choice. Proxima b just became the first planet that is available to us to the extent the distance, which designed the project. Do not think that she will be the only and last goal, says Paul Gilster (Paul Gilster), one of the participants.

In this meeting, which was held at the airfield Moffett field, near the Center of space flights of NASA Ames, was also attended by a number of eminent planetary scientists, cosmologists and specialists in the field of plasma physics, laser, computer technology and other fields of science and technology.

Among them – famous cosmologist Lawrence Krauss (Lawrence Krauss), Nobel laureate Saul Perlmutter (Saul Perlmutter), Philip Lubin (Philip Lubin), the main ideologist of the project Starshot, Lou Friedman (Lou Friedman), a former Director of Planetological society and one of the pioneers in the field of space sailing, and Roald Sagdeev, former Director of the space research Institute, USSR Academy of Sciences in Moscow.

These scientists, as reported by Amateur astronomer, discussed the future architecture of nanoprobes and a number of other practical issues concerning the construction of the project Breakthrough Starshot and its principled implementation. More details will be known this week.