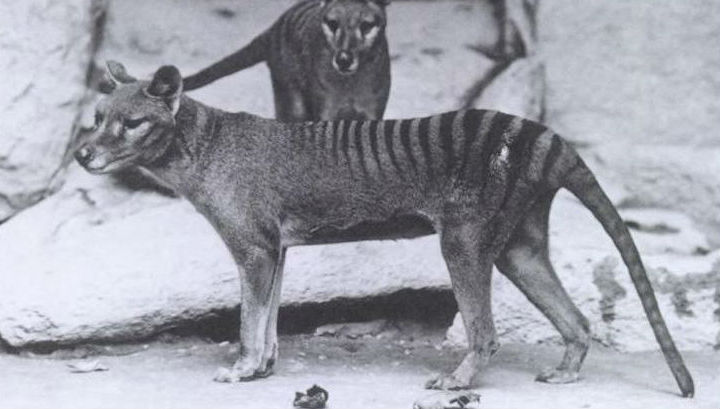 The last known marsupial wolf, or tilatsin, or, as it is often called in English-language publications for characteristic strips, the Tasmanian tiger died at the zoo of the Australian city of Hobart on September 7, 1936. And, despite the reports of meetings with the legendary predator appearing so far, the award in the amount of $ 950 thousand (almost 56 million rubles at the current rate), announced for the capture of a living marsupial wolf, is still not in demand. But the study of the DNA of a unique cub of tilatsin found in the museum store of Melbourne reveals many of the mysteries of the disappeared animal and gives new hope for its cloning.

Once the marsupial wolf flourished throughout Australia, but the appearance of the first hunter-gatherers, along with their dingo dogs – put an end to the free existence of the species. About three thousand years ago the population of tilatsin decreased significantly, and the animals were preserved only on the southern island of Tasmania. But in the nineteenth century the arriving European colonists saw in the wolf a threat to their sheep, which led to the final disappearance of the species.

In total, the remains of over 750 marsupial wolves are kept in world museums. But most of the exhibits are presented in the form of skins and bones with poorly preserved DNA. Only 13 specimens of cubs, taken from mother’s bags and preserved in alcohol, gave scientists the hope of obtaining high-quality genetic material. And among them there was indeed a much desired pattern.

Previously, scientists have already sequenced the short mitochondrial DNA obtained from the marsupial wool. But now the team led by Andrew Pask from the University of Melbourne, got a much longer nuclear genome, taking a sample of one-month-old tilatsin tissue that was placed in a jar of alcohol in 1909.

Nuclear DNA contains much more genetic information than mitochondrial DNA. Therefore, scientists for the first time revealed many details of the life of the marsupial predator. For example, they discovered a sharp drop in genetic diversity in the period from 70 to 120 thousand years ago. This means that the problems of tylacins began long before the first people arrived in Australia.

Previously, the same pattern was found in the genome of another species, experiencing hard times – the Tasmanian devil. Researchers believe that the decline in the number of animals was associated with a cooling climate.

For a long time scientists were also interested in the question of the appearance of tilatsin, namely, its similarity to the horsewhips. It is known that marsupials are an isolated group that survived under the onslaught of more developed placental animals only in conditions of complete isolation on the Australian continent. And yet the marsupial wolf and dog have a common ancestor, who lived on Earth 160 million years ago.

The evolution of tilatsin and modern canines is of particular interest to biologists, because their similar shape has long been considered an example of convergent evolution, and now the Pasca team was able to verify this.

Scientists succeeded in isolating 81 genes common to canine and marsupial wolves, indicating such a development of events. Such genes were not found in the common ancestor of these animals. They appeared after the separation of their genetic lines. Nevertheless, they arose in the process of natural selection in both the dog and marsupial wolves. These genes are responsible for the signs that are beneficial in the conditions in which these predators lived.

For more details on the first results of the study of the marsupial genome, see the article published by the authors in Nature Ecology & Evolution.

Well, the necessary sample was found, the DNA was extracted, and a completely legitimate question hung in the air: what about cloning? Here, opinions diverge. Some scientists, inspired by achievement, believe in the potential possibility of an “uprising from the dead” and rely on the latest technologies for editing genes and reproductive biology. But many other experts also believe that science is not yet ready to perform this miracle, and that the past is still worth stirring.