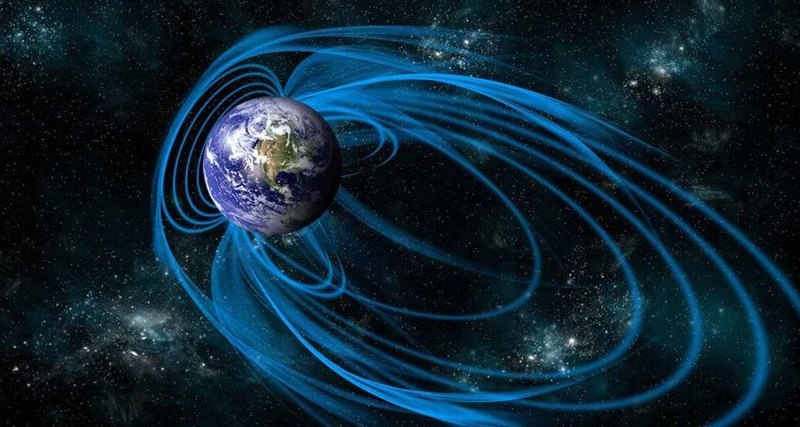 The magnetic field of our planet is shifting to the west because of the giant waves that arise in the liquid matter of the Earth’s core. A geologist from Cambridge, Oliver Bardsley, proposed this phenomenon to an explanation; The article is published in the journal Proceedings of the Royal Society A.

“By its nature, the vibrations that propagate in the core of the planet are an antipode of atmospheric oscillations, Rossby waves – in contrast to them, the crests of the waves in the core always move to the east. In this case, most of the energy of the magnetic field moves in the opposite direction, to the west, “says Oliver Bardsley of Cambridge University (Great Britain).

The position of the poles and that where the arrow of the compass points out is not a permanent property of our planet. Periodically, about once every 450,000 or a million years, the northern and southern poles of the planet change places, the traces of which scientists found in the structure of ancient clays and volcanic rocks. For example, about 40 thousand years ago the north arrow of the compass would point to the modern south pole, and the southern arrow to the north pole.

As noted by Bardsley, over the past two centuries, they have been able to record many hints that something strange is happening with the magnetic field of the planet – its strength falls rapidly enough, 10% every century, and it is gradually shifting to the west. Both of these phenomena are considered by many geologists as a sign that the poles can swap places in the near future.

Bardsley showed that this may not be so, having found an alternative explanation to why the Earth’s magnetic field is constantly shifting to the west. As the geologist notes, this idea occurred to him when he drew attention to the main distinctive property of the core of our planet, which distinguishes it from Mars, Venus and other worlds that do not have a magnetic shield.

The core of the Earth consists of two layers – a solid internal and liquid outer core, the molten metal in which it continuously moves, generating a magnetic field. This same movement, as Bardsley pointed out, will produce another effect, well known to all lovers of tea and coffee.

On the surface of any liquid, if it is well stirred and made to rotate around a certain point, characteristic bursts appear, which physicists call “Rossby waves.” Such waves continuously appear in the atmosphere of the Earth, causing air currents in its high layers to bend and change the trajectory of movement, shifting towards the west, which generates cyclones and other complex weather phenomena.

If similar oscillations exist in the core of the Earth, then, as Bardsley suggested, they should generate characteristic anomalies in the strength of the magnetic field, which can be seen by measuring the deflection in the position of the compass needle from the geographic poles of the planet.

As the calculations of the geologist have shown, such waves will move to the east, and not to the west, as their atmospheric counterparts. On the other hand, they can transfer energy not in the direction of their movement, but in the opposite direction, due to which the magnetic field will move to the west, as indicated by four hundred years of observations. Further observations of the field shifts, as Bardsley hopes, will confirm or disprove his theory.