The giant Asian hornet could spread around the world 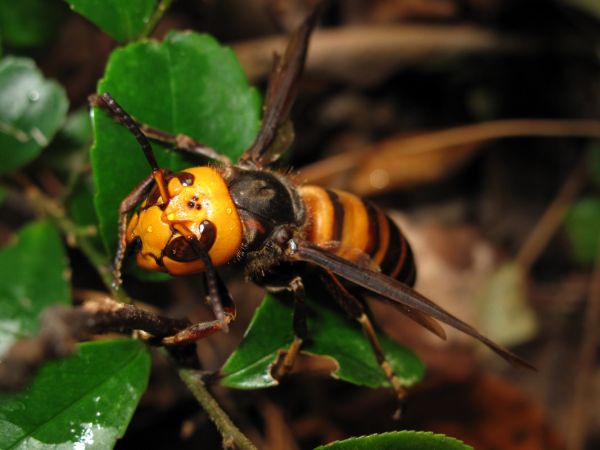 In May 2020, beekeeper Ted McFall from Washington state came to the apiary and found thousands of bee corpses on the ground and the same in hives. It soon became clear that the bee killers were huge hornets, which had previously been observed only in Asia.

Researchers at Washington State University (WSU) have looked into this issue and have come up with a nasty verdict – the Asian giant hornet (Vespa mandarinia) could spread and find ideal habitats in the United States and around the world.

Sharing their findings in a recently published article in the Proceedings of the National Academy of Sciences, the research team discovered that if the world’s largest hornet takes hold in Washington state, it could spread to much of the west coast of the United States.

In addition, the insect can find suitable habitat on the east coast and in densely populated parts of Africa, Australia, Europe and South America if people accidentally bring it to these places.

“We found many climates suitable for it in the United States and around the world,” – Gengping Zhu, lead author of the study.

Working with Washington State Department of Agriculture scientist Chris Looney and WSU entomologists David Crowder and Javier Illan Zhu, he studied over 200 records of the hornet’s natural habitat in Japan, South Korea, and Taiwan, and then used a suite of environmental models that included climate data to to predict the likely global insect habitat on six continents.

“These predictions are scientific research. We make educated guesses about how fast and far these insects can travel, how well they can build nests, and suggest a variety of scenarios, from the least bad to the worst. Nobody has done this before for this species. ”- Gengping Zhu

Inhabiting the forested regions of Asia, the Asian giant hornet poses a serious threat to western honeybees, which have no natural defenses against them. In late summer and fall, hornet colonies attack the hives, destroying entire bee colonies to feed their brood and produce new queens.

Individual subspecies of Vespa mandarinia japonica are more than five centimeters long and have a wingspan of about 7.5 centimeters. These insects feel best in places with warm summers, mild winters and high rainfall. The most suitable habitats for them are in regions with a maximum temperature of 38 ° C.

Based on these factors, suitable habitat for the giant hornet exists along most of the west and east coasts of the United States, adjoining parts of Canada, most of Europe, northwest and southeastern South America, central Africa, eastern Australia, and most of New Zealand. …

Much of the interior of the United States is inhospitable to hornets due to extreme heat, cold, and little rainfall. This includes eastern Washington and British Columbia, as well as the Central Valley of California, which is home to major fruit and nut crops that depend on honeybee pollination.

Using data from a similar species, Vespa velutina, scientists predicted that without containment, Asian giant hornets could spread to the south of Washington and Oregon, as well as north through British Columbia. Calculating that hornets can travel up to 110 kilometers per year, researchers have shown that insects can spread across the western regions of Washington and Oregon in 20 years or less.

“We know that queens come out of the nest in the fall, mate and fly to another place. But no one knows how far they fly or if they do it repeatedly. We do not know if they nest in the spring near the place where they hibernated, or if they start moving again. These are some of the things that make it difficult to predict their natural dispersion. ”- Chris Looney

“Preventing the emergence and spread of the Asian giant hornet in western North America is critical to protecting bees and beekeepers. Our research could provide information on strategies to track down and eradicate these invaders before they appear, ”the scientists conclude.

A Vespa mandarinia hornet bite can be fatal to humans as a result of allergic shock. In a year, about 50 inhabitants of Japan become victims of an insect. How the hornet entered the United States is not yet known for sure. The authorities are fighting these insects, trying to destroy their entire colonies.