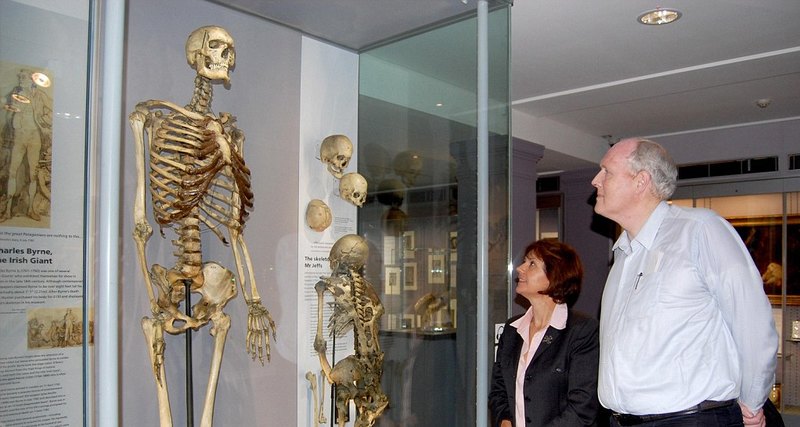 The skeleton of the “Irish giant” Charles Byrne, who suffered from gigantism, will at last be buried; until now he was exhibited at the Hunterian Museum in London, despite the fact that the giant himself asked friends to bury him so that fans of anatomical curiosities did not get to his body.

In Charles Byrne (1761-1783) there were two meters and 32 centimeters of growth; it allowed him to light a pipe from street lamps, not standing on tiptoe, and served as a source of livelihood. Byrne was born in a Scottish village, a teenager came to London and began performing in squares and theaters. He enjoyed great success with the public, newspapers enthusiastically wrote about him, in a few years he created his show.

As is usually the case with gigantism, soon after the age of majority, Byrne began to have health problems. In patients with gigantism, abnormalities in the pituitary gland lead to increased production of growth hormone – somatotropin; in childhood, it causes abnormal growth of the skeleton, and after puberty gives a number of other symptoms, from headaches to hypertension and diabetes. Byrne died at the age of 22, before his death, asking friends to put his body in a metal coffin and throw it into the sea.

So Byrne wanted to protect his body from London surgeons – lovers of anatomical curiosities, which even during the life of the giant expressed a desire to perform an autopsy. Especially the “Irish giant” was afraid of his compatriot John Hunter, the surgeon and owner of the personal curiosity, the collection of stuffed animals and conserved fragments of human bodies, with normal anatomy and pathological changes. Byrne was afraid of Hunter not in vain: he still got the body of a giant, separated the bones and collected a full skeleton, after the death of the collector exposed to public view.

Now the Hunter Museum is closed for reconstruction until 2021, and the Royal College of Surgery staff, who now owns the museum, promise to discuss the fate of the remains of the Irish giant. Earlier, despite numerous petitions of individuals and Irish public organizations, the Royal College refused to betray the giant’s bones to the ground, noting the scientific significance of the skeleton, but in 2018 the fate of the giant is looked at differently, notes The Guardian.

Most of the exhibits in museums like ours, refers to an era when the consent to use your body was unprincipled. But Charles Byrne openly expressed his reluctance to become an exhibit after his death, and we must treat this with respect, “said Karla Valentin, curator of the Pathology Museum at Queen Mary University in London. Activists insist that the Byrne skeleton be removed from the museum collection and is buried in the native village of the giant.