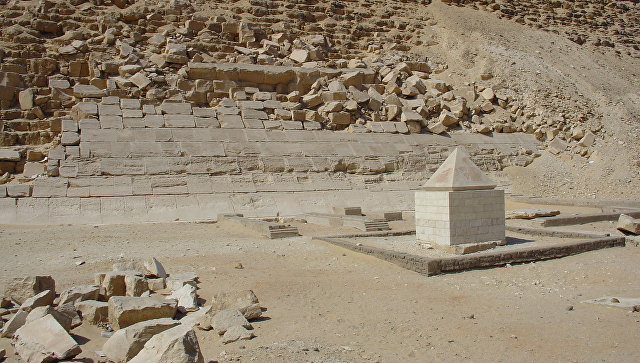 Swiss and French archaeologists have found in the “pyramid valley” in Sakkara the golden tip of the pyramid that adorned the tomb of Pepi’s mother II, one of the last pharaohs of the Ancient Kingdom, the Egyptian Ministry of Antiquities reports.

“We found this stone north of the pyramid of Pharaoh Pepi I, next to the place where we expected the pyramid of his wife, Queen Ankhnnesspepi II, the mother of Pharaoh Pepi II, one of the rulers of the sixth dynasty of Ancient Egypt, to be. since we had no hints that we could find such a pyramid, “said Philippe Collombert, head of excavations.

Almost all the pyramids, built during the heyday of the ancient civilization of Egypt, were visible for tens of kilometers due to the fact that their top was adorned with a special structure – a pyramid, sparkling in the sun.

Pyramidion is a pyramidal stone, covered with gold and other precious metals and adorned with the name of a person buried in a pyramid, which could be both the “master of two houses” himself, and his wife and close relatives. Unfortunately, the gold coating of pyramidions attracted the attention of not only the subjects and guests of the pharaohs, but also the robbers, and none of these stones have reached our days in their original form.

Collomber and his colleagues discovered a monument of this kind, digging in Sakkara – one of the first “valleys of the pyramids” in the history of ancient Egypt, where there are immediately 11 royal tombs and many pyramids and mastab of their wives, children and courtiers.

Studying the deposits in the vicinity of the pyramid of Pepi I, one of the most powerful rulers of the sixth dynasty of the Ancient Kingdom, scientists came across a partially destroyed pyramidion about 1.3 meters in height and about 1.1 meters in length. The upper part of the stone was destroyed, as scientists believe, by robbers, but its base and lower half are well preserved.

In the opinion of archaeologists, this top of the pyramid was intended for the never-built pyramid of Queen Ankhnespepi II, the wife of Pepi I and the alleged mother of Pepi II, in fact the last full-fledged ruler of the Old Kingdom, in which the country began to experience instability due to the growth of the power of the nobles – who ruled individual provinces.

In favor of this, and says that next to the pyramidion, scientists found a fragment of the statue of Ankhnnesspepi II. As archaeologists hope, further excavations will help them to confirm the initial assumptions.