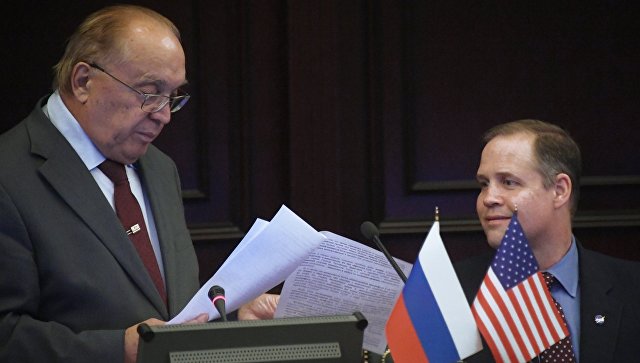 Jim Brydenstein, head of NASA, did not rule out the existence of life on Mars, and noted that its discovery “will forever change” the attitude of the countries of the world to the study of space. He spoke about this at a lecture in the Fundamental Library of Moscow State University.

“I was appointed as NASA administrator quite recently, this spring, and over the next five months, I already witnessed tremendous discoveries made by both Russian and American scientists. They radically changed our perceptions of Mars by finding traces of fluctuations in methane concentration in its atmosphere,” – declared Bidenstayn.

As the head of the space agency noted, these fluctuations “ideally coincided” with the way the summer and winter seasons succeeded each other on Mars. According to him, it still does not allow to talk about the existence of life on the red planet, but it significantly increases the likelihood of its existence, together with some other discoveries, such as deposits of complex organic matter recently found by the Curiosity rover.

For the first time methane on Mars was discovered in 1969 from the board of the Mariner-7 probe, but then this discovery was considered a false positive. Once again, this time truly Martian methane was discovered in 2003 by a group of astronomers led by Vladimir Krasnopolsky using the CFHT telescope installed in the Hawaiian Islands.

This became a real sensation – on Earth, almost all of the reserves of this gas in the atmosphere are of biological origin, and it is quickly destroyed as a result of the interaction of its molecules with the sun’s rays and oxygen. For this reason, Krasnopolsky and many supporters of his theory immediately suggested that the source of Martian methane can be Martian microbes.

Methane can appear during volcanic eruptions or decomposition of plant residues, but both of these mechanisms cannot operate on Mars, where there are no signs of volcanic activity. There are other possible non-biological sources, for example, geothermal reactions and clathrates, and none of them have yet been defined as the “prime suspect.” To solve this problem was to the Curiosity rover, sent to the red planet in 2011.

When Curiosity first “sniffed” and analyzed the composition of the air and the soil content of Mars in 2012 and in 2013, scientists could not find traces of methane in them. However, literally in a few months, the rover sensors recorded several bursts of methane concentration at once.

For the first time, the scientific team of Curiosity decided to announce this discovery in December 2014, and presented its findings in the journal Science in January 2015. This statement immediately caused a lot of criticism from a number of other planetologists. They considered methane to be a by-product of the work of the rover itself, the result of the leakage of one of the reagents from its SAM laboratory, or traces of some “inanimate” processes in the soil of Mars.

In the summer of this year, NASA scientists presented the results of repeated measurements that clearly showed that traces of methane were real, and that its concentration changed with the seasons of the year. This once again showed that Mars was a potentially habitable planet in the past and can remain so even today.

According to Bidenstein, if real traces of life or living microbes are found on Mars, this discovery will radically and permanently change the way governments around the world look at deep space exploration and the prospects for colonization of the planets.

“I believe that we can open life not only on Mars, but also in other parts of the Solar System, for example, on Enceladus or Europe. If this happens, then the attitude of all of us towards exploring other worlds will radically change as we all want learn more about this alien life “, – concluded the head of NASA.