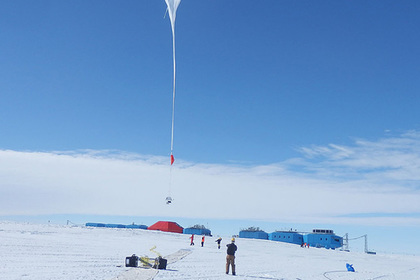 Split of an ice shelf in East Antarctica threatens the research polar station “Halley-6”. The crack which size didn’t change within 35 years has begun to grow in 2012 again. At present polar explorers are busy with moving of a complex to the safe place.

Halley-6 has been established in 2012 for studying of a condition of external layers of the atmosphere of Earth and an ozone layer. She is located on an ice shelf of Brant which thickness reaches 150 meters in this place. This glacier slips towards the sea on 0,4 kilometers a year. Over time he will appear over the surface of the sea and will turn into an iceberg.

The polar station consisting of eight modules and calculated for many years of work is established on piles with a sled that allows to transport structures. Each of modules can be separated from others and is moved by means of the towing tractors. Movement process, by estimates of experts, will take about three years.

The Halley-6 station has been officially open in Antarctic on February 5, 2013. The previous five bases have been buried under snow and ice or are born. In 1985 the measurements made on Halley have led to detection of an ozone gap over Antarctica.