The hypothesis of the distribution of titanosaurs from Africa is confirmed 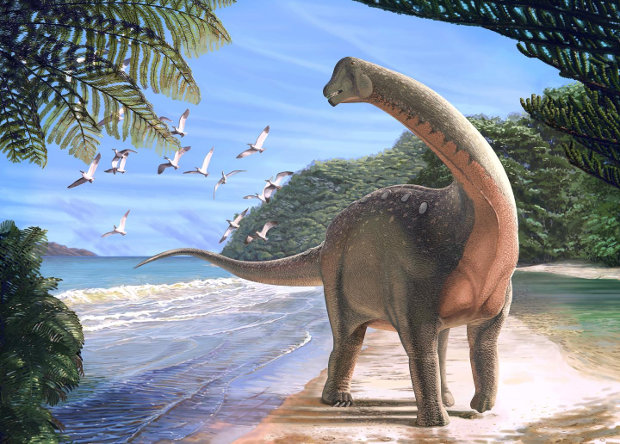 In Egypt, fossils of a new genus and a species of titanosaurs were discovered, according to Nature Ecology & Evolution. The dinosaur Mansourasaurus shahinae lived in the period 83-72 million years ago and belonged to the same group that inhabited southern Europe and eastern Asia. The finding confirmed the hypothesis that vertebrates settled in Africa and Eurasia after the separation of Africa from South America, which occurred about 100 million years ago.

To date, there are two hypotheses describing the development of the land African fauna after the division of the continents into the Upper Cretaceous. According to one of them (1, 2), Africa was separated from Europe, so that vertebrates developed here in isolation. Other researchers suggest (3, 4) that animals migrated from Africa to southern Europe, and the fossils of the upper Cretaceous period can show this. But the problem is that in Africa very few vertebrate Cretaceous remains have been found, with most of the findings being disjointed bones that were difficult to identify.

Fossils of a new genus and the species of titanosaurs Mansourasaurus shahinae were found in the Oakhs Dahla in the north of Egypt. They were studied by Egyptian and American paleontologists under the guidance of Dr. Hesham Sallam from the University of Mansoor. The remains were the most complete skeleton of the terrestrial vertebral period of the Upper Cretaceous found in Africa. Among other things, several vertebrae and ribs, humerus, scapula and fragments of the skull have survived. According to researchers, the titanosaurus reached a length of 8-10 meters and weighed about seven tons (the same weight weighs the male modern elephant elephant).

Reconstruction of the skeleton Mansourasaurus shahinae. The color is the preserved bone

After studying the structure of the new species, scientists attributed it to the family of saltazavrid – dinosaur-titanosaurids, who lived in Europe and Asia. Also, the authors of the study built a phylogenetic tree and found that the closest relatives of M.shahinae were the dinosaurs of the genus Lohuecotitan, inhabiting the south of Europe, and the same group included non-geotaurs from East Asia. Thus, according to scientists, the found remains confirm the hypothesis of the migration of animals from Africa.

Titanosaurs include the largest land animals that ever lived on the planet. It is a patagotitan and argentinosaur that inhabited the territory of modern South America about 100 and 97 million years ago, respectively. Patagotitans weighed about 69 tons and reached 37 meters in length. Argentinosaurs were a little less – a length of 22-26 meters and weighing 60-80 tons.