The iceberg from the glacier Larsen S in a satellite image 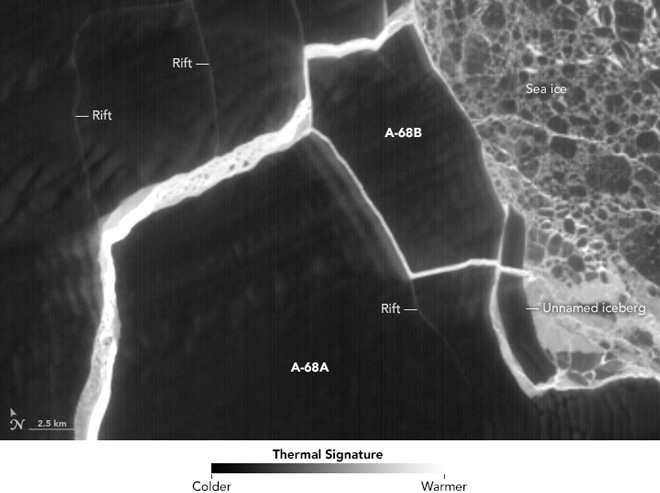 A massive iceberg separated from the Larsen S glacier in Antarctica from 10 to 12 July. Then the scientists already knew that the process would not stop there, and eventually the iceberg would begin to fall apart. This is the normal life cycle of a drifting iceberg, which is dominated by ocean currents, tides. Under the influence of these forces, the A-68 was divided into two bergs A-68A and A-68B, as well as several fragments that are too small for the National Ice Center of the United States to give them names.

Within two weeks after the iceberg broke away for the first time, its movement was recorded on satellite images. The southern end seems to have crashed into a group of drifting shallow ice from Pick Gipps – a rock covered with ice. After that, the iceberg rebounded and its northern end flipped back to the newly formed cleave. Upon impact, the northern tip of the iceberg broke off from the ice shelf. 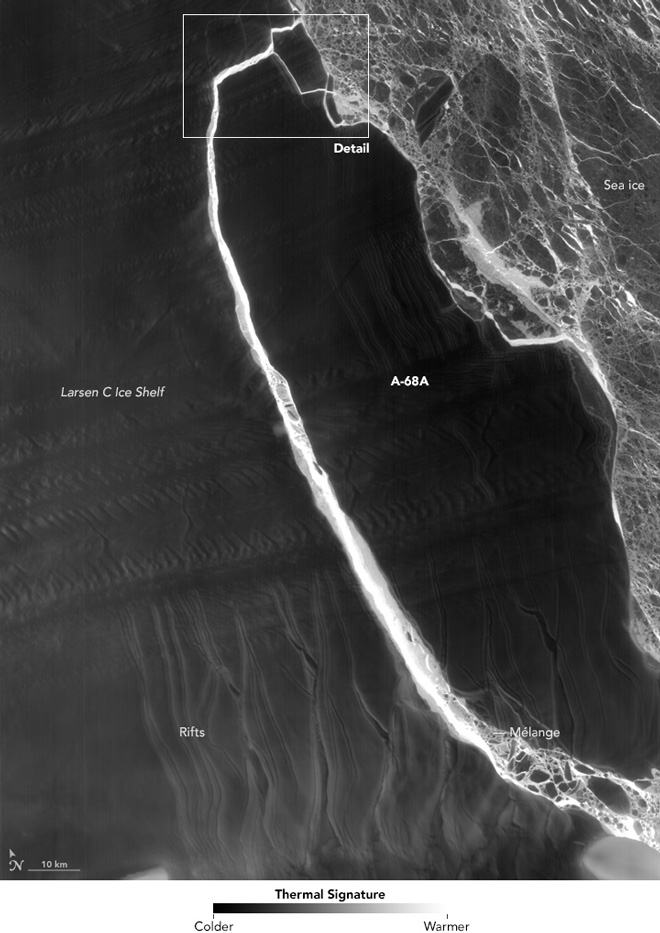 “The A-68 movement back and forth can be compared to the maneuvers that the car makes when parking with a limited space, such as the firm turn of Austin Powers,” said researcher in the cryosphere at the Goddard Space Flight Center and the University of Maryland, Christopher Schumann .

In the images received on July 21, 2017 using a thermal infrared sensor from the satellite Landsat 8, you can see a chopped iceberg and the glacier itself. A special color in the picture shows the relative warmth and cooling in the region. White indicates where the ice or water surface has the highest temperature, especially in the extended band of mixed color between the main iceberg and the remaining ice trail. Dark gray and black areas are the coldest areas of ice.

The process of splitting ice passes under the dark cover of the polar night during the winter in Antarctica. This makes thermal satellite imagery a critical tool for observations. The project participants noticed changes with the iceberg using a spectrometer before the data was received by the Sentinel radar on July 12.

The thermal image shows a lot of details. The bright color of the relatively warm ocean water is found around the A-68B. More pronounced cracks north of the A-68B are visible on the shelf. These areas will eventually split off and go to sea with the rest of the ice.

All pieces of ice experience the influence of the Weddell-Gere current and strong weather systems, which can cause snow and cover the area with clouds for many days at once. Sooner or later, the same circulation of water in the ocean will lead to a shift of the coast to the north of the island of South Georgia.

Scientists intend to work all August – until the end of the polar night, to get the first images in natural light.