The iceberg that split from Antarctica opened a unique life 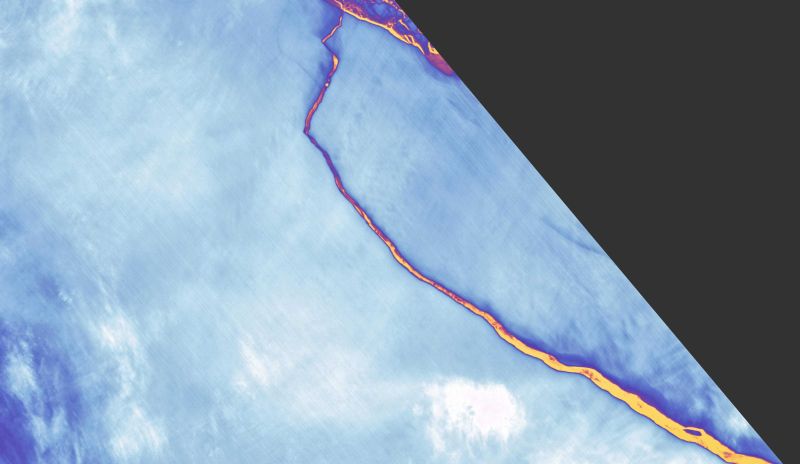 Biologists are rushing to study marine organisms and ecosystems, first discovered by the sun last summer after the largest iceberg broke off from Antarctica.

In July 2017, a huge iceberg broke from site C of the Larsen Antarctic Glacier, the largest of which was recorded: its area was about 5800 km2, and the mass is more than a trillion tons. The iceberg A68, which has gone to the Wadell Sea, is so large that scientists are sure that its separation from ice shelves will lead to an acceleration of melting and, in general, climatic changes throughout the western Antarctic.

However, biologists found in the event a sudden plus: the formation of cracks and the slipping of glacial fields into the ocean opens access to ancient living organisms that were locked under them for about 120 thousand years. This Joe Merchant (Jo Marchant) wrote in the author’s material prepared for the journal Nature.

Sea water and a shallow bottom of 5800 km2, which previously covered the iceberg A68, become available for sunlight and begin to communicate with the rest of the ocean. Apparently, this happens for the first time at least from a long interglacial period 117-128 thousand years ago. And scientists are extremely eager to explore the areas that have remained in isolation for so long, and the processes that will now take place with them.

Last year, the International Commission for the Conservation of Antarctic Marine Living Resources (CCAMLR) decided to refer the marine ecosystems emerging from melting ice to the “Special Area for Scientific Study”. This status gives them protection from fishing, which is prohibited in these areas for at least two years and with the possibility of extending to ten.

Meanwhile, the British Antarctic Expedition (BAS) is preparing in early 2018 to send a research vessel to the area of ​​the former site of A68 from the Larsen glacier. For 2018 and 2019 years. accordingly expeditions of the South Korean and German polar explorers are planned: scientists hasten to begin work before new conditions radically change a condition of unique ecosystems. 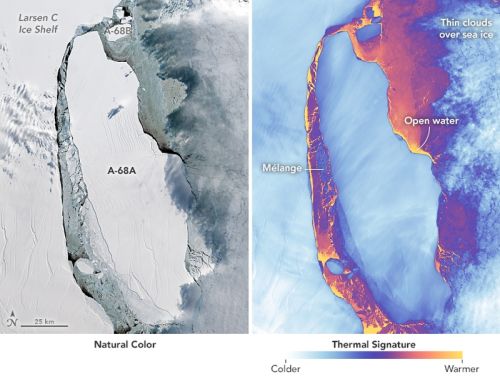 Iceberg A68 in the visible and infrared ranges, images taken September 16, 2017 by the satellite Landsat 8 / © NASA

“It’s not easy to mobilize research efforts, it takes a lot of money, and it’s not easy to organize a vessel, especially in such a short time,” says marine biologist from BAS Susan Grant. “But the fact that many groups are trying to solve these problems as soon as possible shows that the opportunity has opened up really rare.”

While no one can exactly say what discoveries are waiting for scientists in Antarctica. Perhaps, they are indicated by the past experience of the collapse of the Larsen A and B glacier sites that occurred in 1995 and 2002. One of the main results of the study of the then discovered ecosystems on the shelf was their similarity with the ecosystems of the great depths of the ocean. However, these conclusions have yet to be confirmed, and next year we can get such data.