The imaginary has transcended what is seen in the authenticity

Psychologists from Osnabrück University have shown that in conditions of sensory uncertainty, a person is inclined to make decisions on the basis of assumptions, and not reliable information.

An important condition for adaptive behavior is the integration of sensory stimuli. In a number of cases, for example, in traumas, this process may be violated, which leads to the need to fill the lack of incoming information based on past experience. However, direct perception of the environment is limited even in the norm. In chordates, an example is a blind spot – the place of entry into the retina of the optic nerve, where there are no photoreceptors. In a blind spot (at one of the points on the periphery of the view), the visible object “disappears” and is recreated by the brain on the basis of hypotheses. The way in which the authenticity of the reconstructed elements of the perceptual picture is estimated has not been studied enough.

To find out, the authors of the new work carried out a series of experiments. Volunteers performed the task of two-alternative forced choice (2AFC task). At the first stage, 24 of them showed a circle in a 3D-monitor with a continuous black and white pattern and the same circle, but with an artifact in the center. When placing the first in the blind spot (on the periphery), its center turned out to be invisible, while both stimuli, because of goggles, participants perceived only one eye. Then they indicated which of the circles does not contain or contains an artifact. In total, 100 people took part in the work, in four other sessions additional conditions were used. 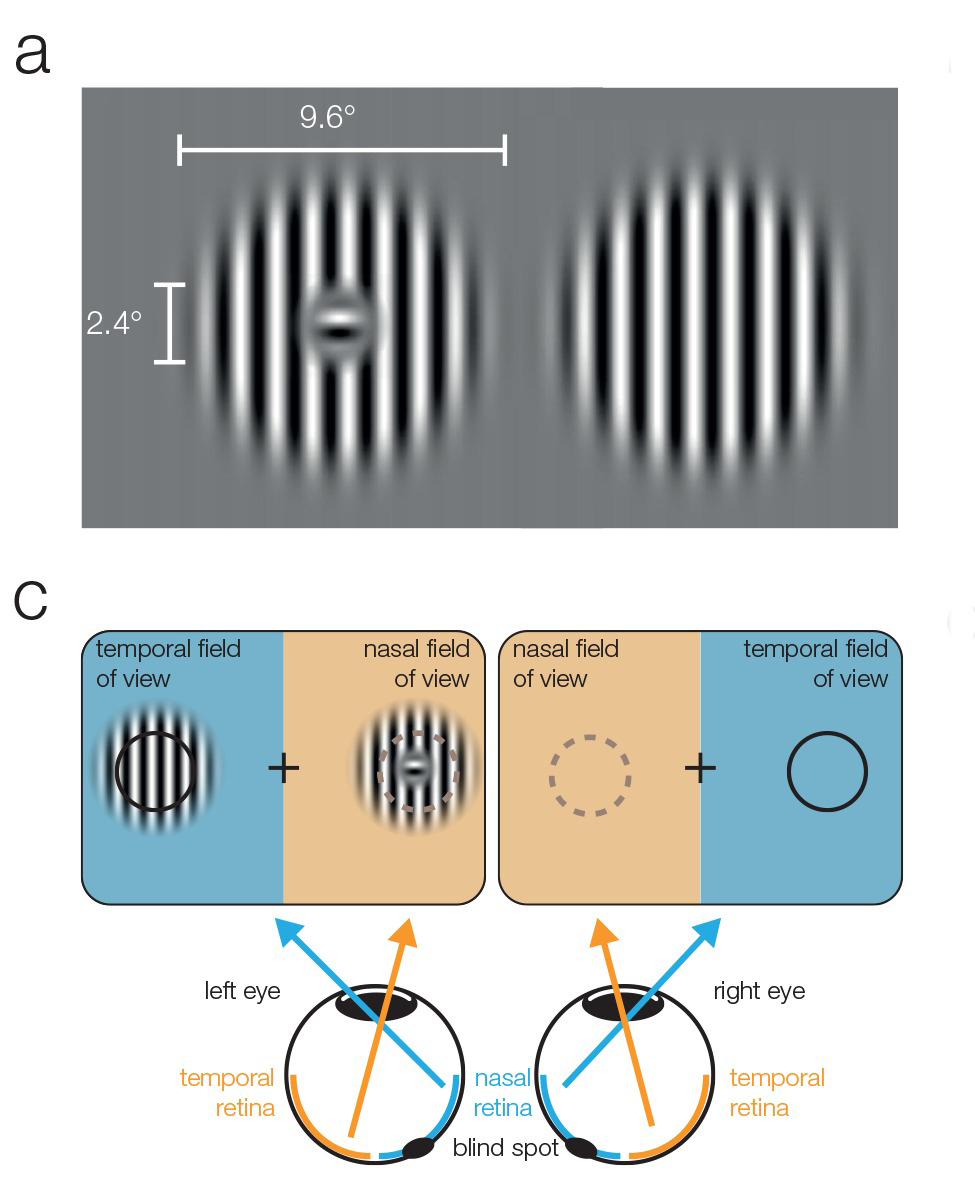 Stimulant material and an example of an experimental session. Blue indicates the area of ​​the blind spot on the retina and the corresponding “observable” zone / © Benedikt V Ehinger et al., ELife, 2017

Thanks to this design, scientists could assess the specifics of decision-making in a situation of uncertainty. According to the main hypothesis, because of the incompleteness of the picture, participants could not reliably distinguish circles, so their choice should be random (despite the apparent simplicity of the problem, it should be taken into account that perception in this case was distorted by monocular vision: the missing links were also “finished” with the closed eye , Which could “mix” the images visible by the other eye, leveling the differences between them). An alternative assumption was that the subjects trusted the stimuli outside the blind spot more and, as a consequence, would tend to choose them more often.

However, the results showed the opposite: the volunteers preferred the stimuli that were in the blind spot area. The trend persisted even when the scientists made an amendment to a possible inclination to choose circles located in one area or another (in the last experiment, the stimuli with the artifact were always in the focal plane). The reason for this behavior is unclear. According to the authors, the obtained data indicate that in the case of a person, the supposed information appears to be superior to the reliable (visible) value criterion. This may be due to increased activity of neurons in the optic nerve or coding error.