The incredible impact force of rotapods was explained with ceramic springs.

Claws of mantis shrimps strike, the power of which is comparable to a bullet hit due to the elegant saddle-like structure of the joint, which accumulates energy in the “ceramic spring”.

Sea mantis shrimps are known as owners of the fantastically complex “trinocular” visual apparatus. It includes branchy faceted eyes and from 12 to 16 types of photosensitive receptors, is able to adapt to the spectrum of the environment, distinguish a myriad of colors from infrared to ultraviolet plus different forms of polarization of light. The vision of these rotapods is so great that a separate explanation is needed even for why they need such complexity at all.

But surprise is their fighting abilities. The claws of some mantis shrimps, like the grasshopper’s hind limbs, are capable of accumulating elastic energy and releasing it at explosive speed, accelerating to 23 m / s. Such a blow will also easily injure a person: his energy is comparable to the energy of a 22-gauge bullet. Scientists have only now understood how small claws of a rotopeg are capable of accumulating enough power. This Singaporean researchers reported in an article published in the journal iScience.

The “fighting” claws of the rotonodog act in the manner of a spring. The work of powerful muscles attached to a strong, but elastic saddle-like structure of the joint, causes it to deform, accumulating energy. The device and impact biomechanics were investigated by Ali Miserez (Ali Miserez) and his colleagues from Nanyang Technological University. The authors noted that the saddle-shaped joint provides a uniform distribution of the load over almost the entire area, without any “weak points”. 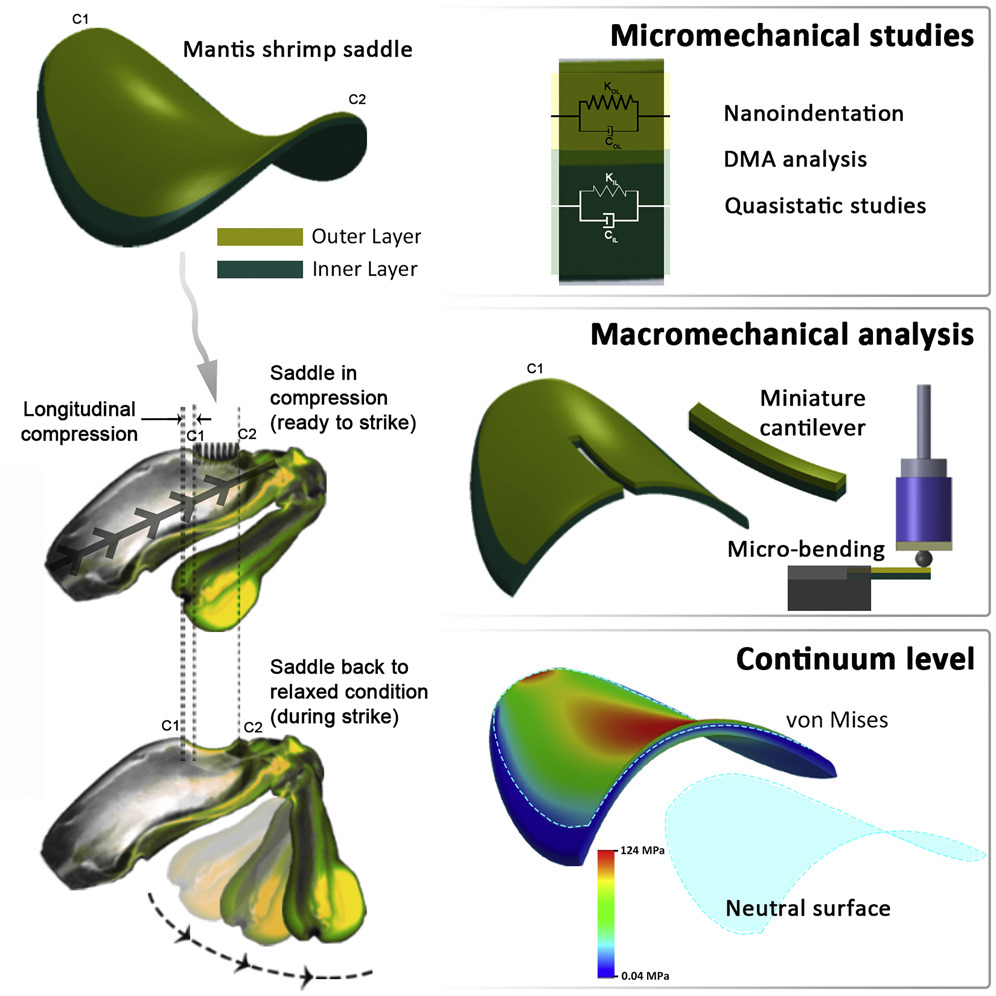 But the main secret of the rotonogs was the two-layer structure of the articular “saddle”: the elastic layer of biopolymers in it is combined with a layer of highly mineralized tissue. Such mineralized ceramics is not the most obvious material for the spring. However, scientists have found that when deformed, the saddle bends so that its upper “ceramic” layer contracts, and the lower, elastic layer stretches. Ceramics is very fragile when stretched or flexed, but resistant to compression, and due to its durable crystal lattice it is able to accumulate an exceptional amount of energy. The second polymer layer is deformed easily and ensures the integrity of the entire structure.

Unlike the visual apparatus of the rotapods, the biomechanics of their claws can be reproduced at the modern level of technological development. Probably, soon we will see such saddle double-layer mechanisms in robots – miniature, but no less militant than the praying mantis themselves.