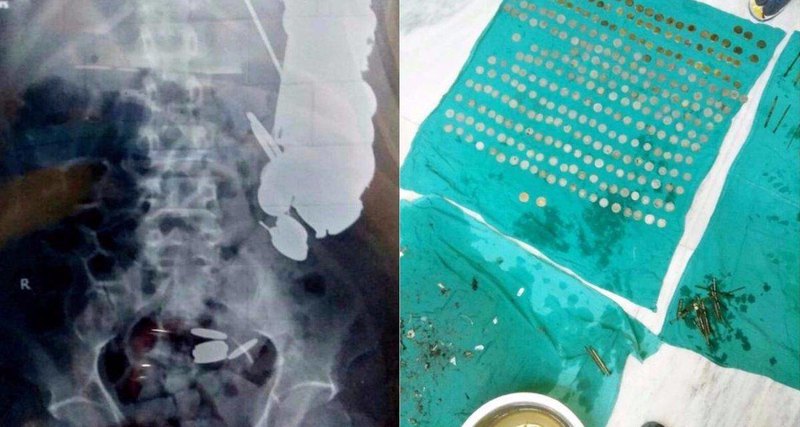 Maksud Khan turned to the hospital because he had a stomach ache; the man suspected that he had poisoned himself with food. Doctors brought him into the stomach of the camera and saw a whole treasure: a collection of blades, coins, nails and other items weighing 6 kilograms.

Surgeons took all this wealth out of Khan’s abdomen. Fortunately, the metal lay in the stomach not long enough to poison the patient; Khan got off with internal bleeding.

and then asked the man about how many inedible things were in his stomach. Khan admitted that he had swallowed coins and other metal objects voluntarily. This behavior is quite common in those who suffer from depression, especially in men; sometimes it is associated with a desire to harm yourself, but in some cases, patients eat strange things for more complex reasons – so, there are cases when people swallowed knives, realizing the danger of this action, but finding no other way to get rid of painful experiences.

Newsweek notes that such habits, as well as certain similar incidents, are not only dangerous, but also damage the economy: in 2010, a study conducted in an American hospital showed that 33 people who swallowed something that was not worth swallowing were treated taxpayers in 2 million dollars – and this despite the fact that in most cases, foreign objects could be extracted without a scalpel. Three quarters of patients suffered from depression or post-traumatic stress disorder.

Obsessive desire is inedible objects and substances called picacism; it is observed with certain mental disorders and organic lesions of the central nervous system.