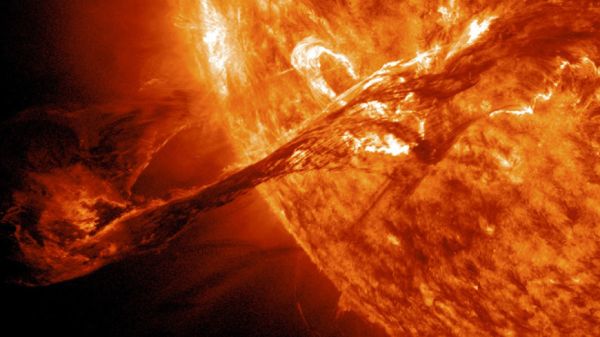 Researchers at the Polytechnic Institute of Paris in France conducted an experiment recreating the birth of the solar system in the laboratory. Its active formation began after a supernova explosion, according to Matter and Radiation at Extremes.

It is known that the “building blocks” for cosmic bodies are contained in molecular clouds. But they can remain dormant for millions of years until some catalytic event occurs.

According to scientists, in ancient times the future solar system was a similar cloud. But then the nearest giant star exploded and sent shock waves of high-energy particles into the surrounding space.

Upon reaching the cloud, the waves caused the dust and gas to rotate around the dense region at its center – the protostar. As a result, the particles began to form new planets. Otherwise, they would have been pulled back to the nascent Sun and contributed to the formation of a larger star.

But this is just a theory. Astronomers still do not know for sure how the formation of new star systems occurs. They have not yet been able to observe a similar event in space. They were also unable to recreate it using mathematical modeling, as the system is unable to analyze the complex interaction between clouds and supernova remnants. Therefore, the authors of the new scientific work decided to apply a different approach – an experiment in the laboratory.

The scientists used a Styrofoam ball to represent a dense area inside a molecular cloud, and a powerful laser that sends out a blast wave. The wave passed through the gas chamber and reached the ball. The process was recorded using X-rays.

The researchers hypothesized that the shock wave would cause the balloon to collapse, which would have accelerated star formation under space conditions. But, as the experiment showed, part of the material in the ball was compressed, and part was stretched, which changed its average density.

Scientists noted that they plan to conduct a number of additional experiments based on new data. So, they intend to more accurately measure the compressed material, as well as take into account the influence of radiation, magnetic field and turbulence on the process of star formation.

“This experiment opens up a new and promising avenue for laboratory astrophysics,” the paper reads.