The land was never barren 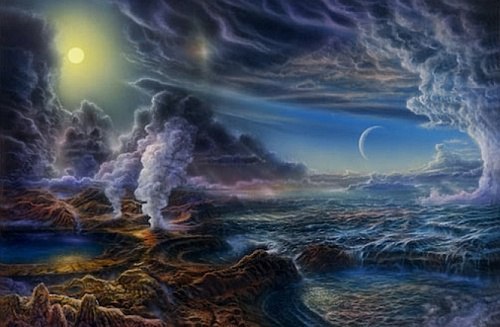 Traditional scientific theories claim that life on our planet arose only much later after the Earth itself formed. However, a group of geochemists from the University of California at Los Angeles (UCLA) believes that the first living organisms could appear 4.1 billion years ago — shortly after the formation of the planet.

Zircons and the history of the Earth

Quite a long time it was believed that the young Earth was a barren desert where there was no room of life. And only about 3.8 billion years ago, conditions have become sufficiently favorable for the origin of living organisms.

However, recent studies show that life on our planet existed before the Solar system was subjected to the inner asteroid bombardment, which today resemble giant craters with ages of 3.9 billion years.

If all life on Earth died during this bombing, what do some scientists, then life had to transform quickly, says one of the authors of the new study, graduate student Patrick bene.

Meanwhile, a team from UCLA have discovered evidence that at least 4.1 billion years ago life on Earth was present. Geochemistry Professor mark Harrison and his colleague, Professor of Geology and Geochemistry Craig manning in collaboration with former UCLA graduate student Michelle Hopkins back in 2008, published in the journal Nature article, which proves my theory.

The researchers studied more than 10,000 samples of zircon, formed from molten volcanic rocks in Western Australia at the dawn of planet formation.

The ratio in these rocks carbon-12 and carbon-13 indicates the presence of photosynthetic life.

Highlighting 656 specimens with dark spots, the researchers subjected 79 of them Raman spectroscopy — methods, which you can use to see the molecular and chemical structure of ancient microorganisms in three-dimensional models.

It turned out that one of the samples in two places that has inclusions of graphite are pure carbon. The ratio in a mineral of uranium to lead has helped determine the age of 4.1 billion years. But graphite may be older than other components.

It’s the best documented cases of direct inclusion in the mineral, and no one has still not offered a decent alternative explanation of this graphite non-biological origin of the zircons, says Harrison.

How were the processes of evolution

According to scientists, life on Earth can exist everywhere, and need not so much time that it arose. In all probability simple organisms appeared on Earth almost immediately after it was formed, but it took many millions of years that they have developed the ability to photosynthesis, so that they can directly use solar energy.

This contributed to the filling of the atmospheric oxygen (which occurred about 2.5 billion years ago) and the formation of the ozone layer, absorbing the destructive ultraviolet radiation.

Further, the processes of symbiosis of small cells with larger has led to the development of more complex living cells, the eukaryotes. About 2.1 billion years ago there were multicellular organisms. The process of adaptation to the environment continued.

Then life continued to evolve, despite several periods of mass extinction in relation to the various disasters that shook the planet.

The land has never been lifeless?

Twenty years ago it would be considered heresy to find evidence of life age of 3.8 billion years was a shock, commented Harrison. — Life on Earth could begin almost immediately. Provided all the right ingredients, life, like, is formed very quickly.

Elizabeth bell, who is also involved in the study, believes that the Earth originally was not so dry, the conditions were much closer to the present than you can imagine. So what about the theory of a lifeless planet can be forgotten.