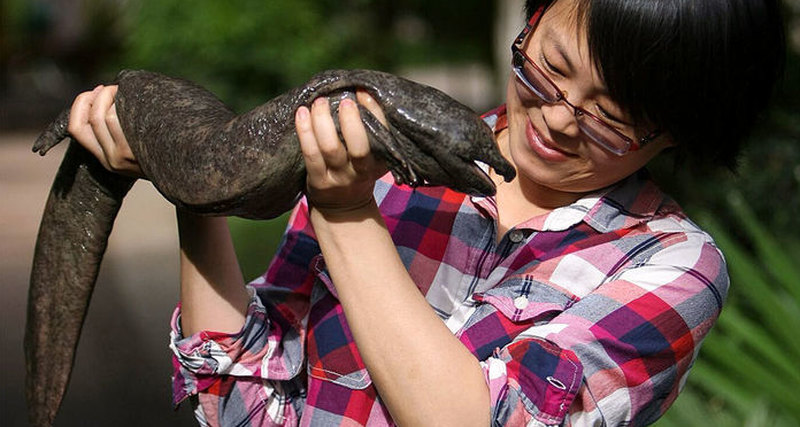 According to a new study, the Chinese giant salamander – the largest amphibian in the world – is on the verge of extinction from the wild.

Adult individuals of Andrias davidianus grow to 2 meters in length, and in the past abundantly inhabited rivers in the southeastern regions of China. In total there are five kinds of these amazing creatures, however modern methods of conservation of wild nature can lead to genetic mixing, as a result of which all diversity will eventually be reduced to a single species. Meat salamander is considered an expensive delicacy, but because the demand for it is always great. Large entrepreneurs plant them on special farms, and the Chinese government, in an effort to preserve the endangered species, encourages the liberation of part of the offspring into the wild. However, it is unclear whether the “cage” individuals correspond genetically to their wild relatives.

To understand this, scientists analyzed DNA of 70 wild salamanders and 1034 grown on a farm. The team found that wild individuals are divided into five highly developed, independent from each other genetic groups, which separated from each other from 5 to 10 million years ago. But the salamanders, who grew up in bondage, demonstrated a significant mixture of the genes of different groups, as described in a new study published in Current Biology. This means that any release of these salamanders risks causing imbalances in the wild and leading to the emergence of new species – it is not yet clear how viable they will be and whether it will lead to complete extinction.