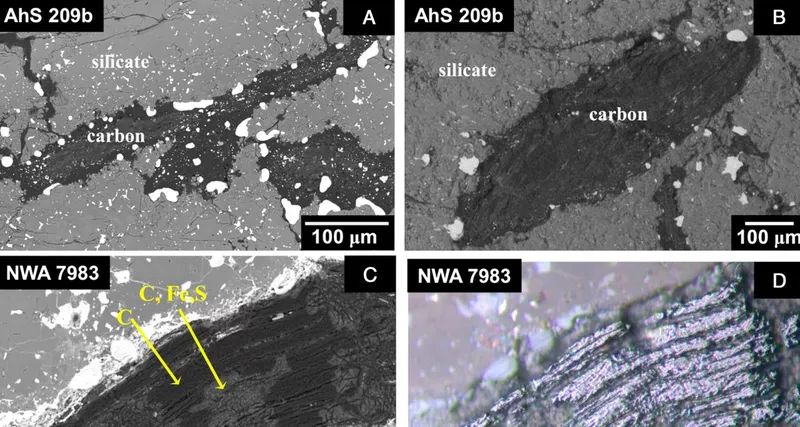 It is estimated that about 10 million objects rotate in the asteroid belt, the origin of which dates back to the period when the planets formed from a huge cloud of gas and dust orbiting the Sun. Asteroids are sometimes thrown from a constant orbit, and as a result, some of them, large enough not to burn up completely in the atmosphere, fall to the Earth’s surface. These meteorites are a valuable object of research, as they can tell a lot about the appearance, development and death of the planets of our star system.

This is what attracted the scientific group led by Fabrizio Nestola and Cyrena Goodrich, which included scientists from Germany, Italy, the USA, Russia and a number of other countries. They investigated ureilites found in Morocco and Sudan – these rare meteorites are fragments of a large celestial body, possibly a small planet, which split due to a collision with another space object.

Ureilites often contain large amounts of carbon, including in the form of graphite and nanodiamonds, which could not have been formed as a result of a meteorite falling to Earth, since the impact energy in this case must be too high. It was believed that they appeared in the same way as Earth’s diamonds – under prolonged pressure inside a protoplanet, comparable in size to Mars or Mercury.

However, the group of Nestola and Goodrich found in the ureilites not only nano-, but also rather large diamonds – up to 100 micrometers in size. At the same time, it turned out that they appeared as a result of very strong and sudden pressure, as indicated by other minerals found in meteorites – in particular, silicates. According to the authors of the study, these diamonds were formed most likely as a result of the impact of a huge asteroid or even a small planet in the mother body of the ureilites, and perhaps it was this impact that destroyed it.