The largest fungus in the world grows on the planet 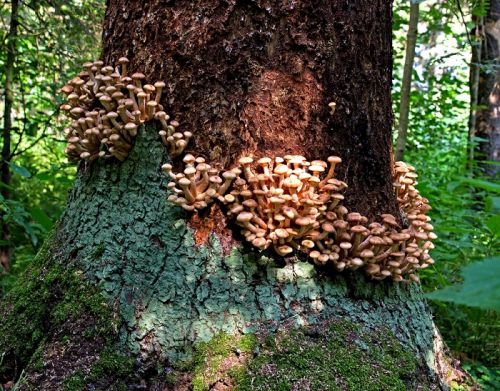 It’s hard to even imagine that the fungus, or more precisely, the mycelium of the dark gum, growing in the forest reserve of Malur, Oregon (USA), is on the list of the largest living organisms on Earth. Mycelium lives on an area of ​​almost 1000 hectares, which is approximately 1600 football fields. The age is 2,500 years, weight – more than 600 tons. The fungus is also called the Oregon monster, or Monstrous Monkey. The reason for this name lies not in its colossal territorial scales and weight, but in the fact that the mycelium, entangling the roots of trees, causes their death. Already many trees in the reserve have become victims of this octopus, and it was precisely on the mass death of plants that scientists learned about the giant.

Previously, the leader was considered a mushroom pickle dark in the state of Washington on an area of ​​600 hectares. It is likely that the Earth is inhabited and larger mycelium, the existence of which is still unknown due to the difficulty of their determination. “The phenomenon of a serial killer” of trees was explained as follows: a giant mycelium twists the roots of trees, introducing into the thickness of the wood special thin threads – rhizoids. Due to rhizoids mosses, lichens, algae and fungi cling to the surface, in a particular case – to the bark and roots of trees, pumping out moisture and nutrients from them. Biologists, having conducted a comparative analysis with other fungi, have found out that rhizoids of the dark spawn possess a unique genome that can perfectly and efficiently decompose lignin. And the main purpose of lignin, which is part of all terrestrial plants, is to ensure the tightness of the walls of the vessels, through which water moves and the nutrients dissolved in it.

The authors of the work suggested that, most likely, the ability to destroy tissues of higher plants arose from the Oregon monster at a time when their ancestors ate only the wood of dead trees. In the course of evolution, they gradually adapted to the penetration of the bark of healthy plants – both conifers and a number of others. Their rhizoids, once penetrated under the bark, spread to tens of meters, pumping water along the way, saturated with nutrients. The trees, entangled by the rhizoids of the darkened dawn, are dying with time.

It is difficult to detect mycelium. Obvious evidence of its life activity are organisms in the form of mushrooms with hats, growing on stumps, trunks and roots of trees. According to the authors of the study, today these largest organisms in the world pose a serious threat to forests, mainly conifers, causing outwardly causeless death of trees. There are almost no effective methods of fighting them. Researchers note that all kinds of fights are destructive pathogens. Because of them, forests are often extinct in many regions of the planet.