The largest star in the Milky Way is slowly dying: astronomers are watching this 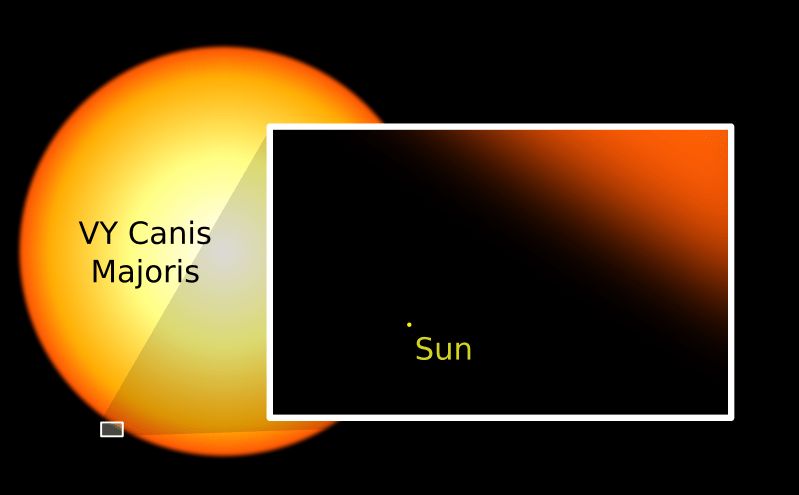 Astronomers at the University of Arizona have developed a model for the aging of VY Canis Majoris, a red hypergiant that may be the largest star in the Milky Way.

The authors are going to use this model to predict how the star will die.

Technically classified as a red hypergiant, it is one of the largest stars in the galaxy. The size of VY Canis Majoris is approximately 1,800 to 2,100 Suns, and the mass is 15 to 25 times greater. At its peak, the star weighed as much as 40 suns. However, astronomers believe that the star has already moved beyond the main sequence and is starting to die. Therefore, a significant part of the mass of VY Canis Majoris has already been carried away by solar winds.

The question of how red hypergiants die is a matter of controversy. Previously, astronomers thought they were simply exploding in a supernova, as most other stars do.

But new data show that there are not as many supernovas as exploding stars, but fewer. By far the most widely accepted theory is that they are most likely collapsing into a black hole. Such an object is much more difficult to observe than a supernova.

But it is still unknown what characteristics a star must have in order to become a black hole. To understand this, the authors chose VY Canis Major. The star has a huge size, and it is also close to our solar system, so it is very convenient to observe it.

One of the main indicators that a star is dying is the loss of mass. As a rule, this happens when gas and dust simultaneously begin to disappear from the star’s photosphere. But VY Canis Majoris has massive objects similar to Earth’s coronal arcs, though they are a billion times larger.

UA researchers used data from ALMA to capture radio signals that are indicative of these eruptions. Sulfur dioxide, silicon dioxide and sodium chloride are erupted.

It is rare for astronomers to collect such a data object from just one object. Now, the data from the math model will continue to be updated so that the model will show when VY Canis Major will finally officially die.