The laser from water and light is created 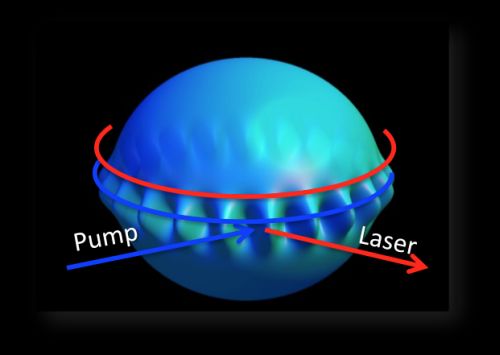 The Israeli scientists showed a method of receiving a laser radiation in case of interaction of light and a drop of water.

Classical method to receive a laser radiation – “to pump up” energy a working body and to irradiate it with photons. If these photons bear the same energy, as the excess which is saved up by atoms of a working body, then it will lead to origin of stimulated radiation: atoms will emit new photons of the same characteristics that initial. However the method offered by the physicist from the Israeli institute of technology of Technion Leopoldo Martin and his colleagues noticeably differs from this diagram.

“Working body” in their system the tiny drop of water with octane adding appears. The surface of liquid permanently “worries” at the microscopic level, making thousands of oscillations a second. It, certainly, is many orders lower than oscillation frequency of an electromagnetic radiation. However scientists, having weighed such drop in the installation, brought to it light on the light waveguide. Its characteristics were picked up so that light wave, repeatedly running all over a drop surface, again and again passed on it, being in time repeatedly (about one million times) to provzaimodeystvovat with a wave of oscillations of the drop – still stored energy, at last, isn’t discharged by stimulated radiation.

According to authors, these interactions remind a repeated echo which rushes about between gorge walls. To facilitate movement to light, liquid in a drop shall be the most pure and leaky (not knitting) – and meanwhile to it is far on convenience, reliability and simplicity to the modern junction lasers. However in the theory the “concept” shown by the Israeli physics can find a lot of the useful applications. So, in article published by log Nature Photonics, Martin and its coauthors note that water – substance easily deformable, and in the future exact control over the sizes and the form of a drop will allow to receive the laser which radiation characteristics quickly change in the side necessary to us.