The last glacier of Venezuela

In 1910 glaciers occupied an area of ​​at least 10 square kilometers in a mountainous region in the north-west of Venezuela. Today, less than 1% is left from their area, only one glacier. The continuing retreat of the Humboldt glacier – the last site with long ice in the country – suggests that soon there may be no glaciers left in Venezuela.

Using the OLI tool on NASA’s Landsat 8 satellite, it was possible to obtain these glacier images in natural colors. They were made on January 6, 2015. The top image is combined with the topographic data of the NASTA Shuttle Radar Topography (SRTM) mission and shows the glacier in context with topography. 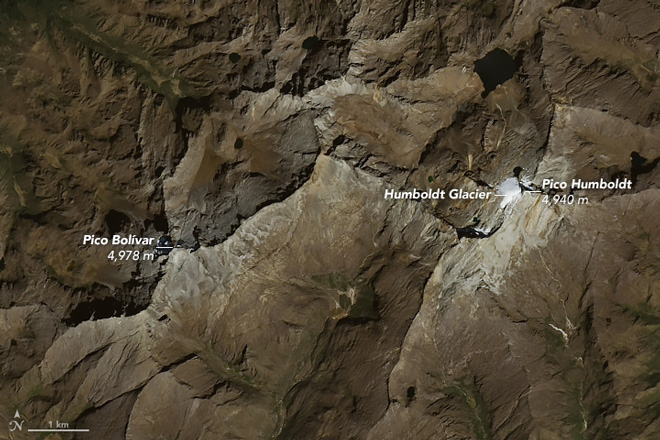 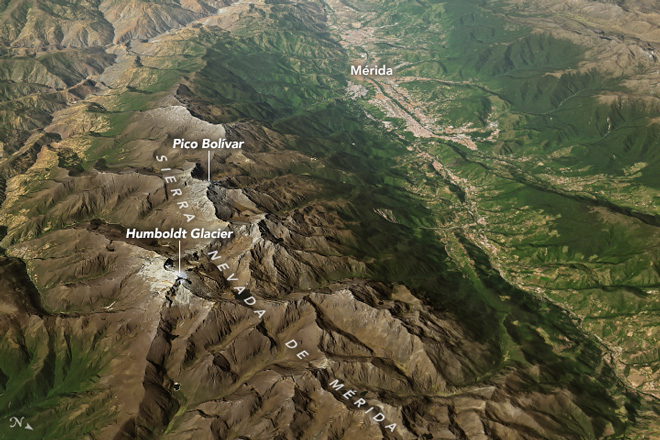 The glacier is located in the Sierra Nevada de Mérida – the highest part of the Andes Mountains in Venezuela. It is located on the slope at the 4942-meter peak of Humboldt Peak. For comparison, the nearby Peak of Bolivar is the highest peak of the country – its height is 4978 meters. In fact, topographic features may be one of the reasons why the glacier has not yet disappeared.

According to Carsten Brown of the University of Westfield in Massachusetts, who surveyed the glacier in 2015, it is not entirely clear why he is still in place. Most often you can find the last remnants of glaciers hidden in shaded and dark glacial circuses, but this does not apply to the Humboldt glacier. Most likely, despite the fact that these mountains have very steep slopes, the Humboldt glacier may be located on a single rather large and less steep area and high enough to accumulate snow. 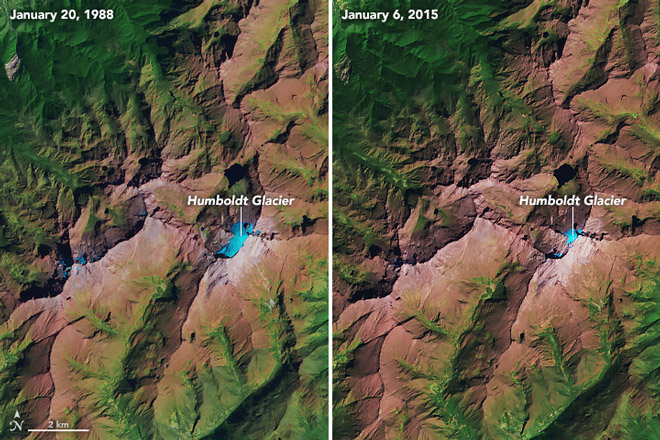 The cold and snowy climate at high altitudes is a key factor for the existence of glaciers in the tropics. Most tropical glaciers of the Earth are in the tropical Andes, which pass through Venezuela, Colombia, Ecuador, Peru and Bolivia. But warming contributed to their melting, including the Humboldt Glacier. Relatively recent changes in the glacier are evident in these images taken on January 20, 1988 and January 6, 2015 from the Landsat 5 satellite. Images are made in false colors to better distinguish between snow and ice (blue), earth (brown) and vegetation (green) . According to Brown, the glacier in 1988 occupied about 0.6 square kilometers. By 2015, its area has shrunk to less than 0.1 square kilometers. Brown notes that scientists are currently exploring a huge number of factors and variables that can be determined when it disappears forever. He added that this will happen within 10-20 years.