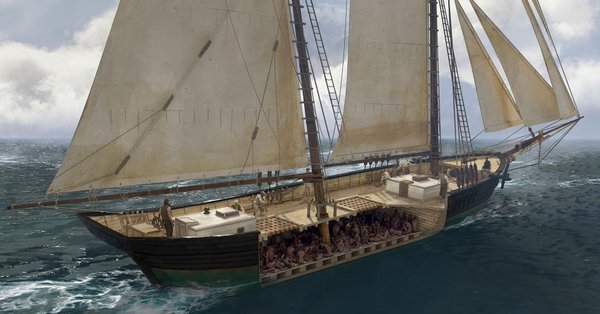 Specialists from Alabama managed to identify the remains of the last known slave-owning schooner and confirmed its authenticity. Sailing ship “Clotilde” sank on the Mobile River (Alabama, USA) 159 years ago. But where it sank, until recently, was unknown.

After a long search, the remains of the schooner were discovered in 2018, and a year later the authenticity of “Clotilde” was confirmed.

Historians involved in the search collected hundreds of records from more than 2,000 ships moored in the Gulf of Mexico in the late 1850s. They found the insurance and registration documents of Clotilde, as well as identified the building materials of the ship, according to National Geographic.

The mystery of the disappearance of the ship was associated with its illegal flights. In the US, it was forbidden to bring people in as slaves since 1808. But 50 years after the ban on the transatlantic slave trade, men, women and children from West Africa were supplied to plantation owners. According to the Smithsonian Institution (USA), they had to work in the cotton fields.

The last flight of the Clotilde with 110 slaves on board was testified by those who arrived in the USA in 1860. But no one knew what happened to the ship that had completed its last voyage. And many, by the way, doubted whether there was any flight at all: there was no documentary evidence.

Now evidence is found, and the mystery of the ship is revealed.

Having brought the slaves to Alabama, Captain William Foster, in order to hide the crime, set fire to the “Clotilde” on the Mobile River.

The researchers stressed that the find is of great historical importance. “It was a search for our identity, as well as a search for justice,” said project deputy manager Paul Gardullo.

According to historians, most of the Clotilde slaves after their liberation at the end of the Civil War in 1865 remained in the city of Mobile and founded a small village to the north of it.

The slaves who arrived aboard the Clotilde were the last of an estimated 389,000 Africans brought to America from the early 1600s to 1860.