The magnetic field of the Earth shifts to the west 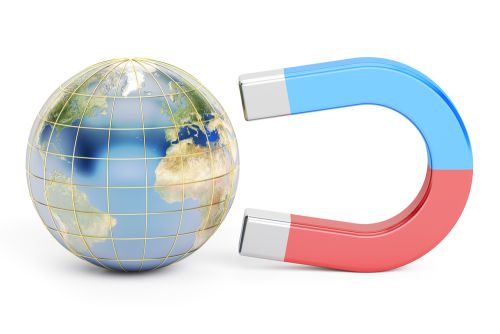 The article, recently published in the journal Proceedings of the Royal Society A, reports that the magnetic field of our planet is gradually moving to the west. And this is due to the giant waves that arise in the liquid matter of the Earth’s core. This explanation was made by Oliver Bardsley, a geologist from Cambridge.

In his opinion, the oscillations observed in the core of the planet are similar to large-scale atmospheric oscillations – the so-called Rossby waves, which, as is known, are moving to the west.

If there are similar oscillations in the Earth’s core, then they must generate anomalies and in the strength of the magnetic field, which can be seen by measuring the deflection in the position of the compass needle from the geographic poles of the planet.

As shown by calculations Bardsley, such waves will move to the east, and not to the west, as their atmospheric counterparts. On the other hand, they can transfer energy not in the direction of their movement, but in the opposite direction, due to which the magnetic field will move to the west.

Further observations of the magnetic field shifts, as the scientist hopes, will confirm or refute his theory.

It should be noted that the position of the poles and the direction indicated by the arrow of the compass is not a constant. Scientists believe that approximately once in 450 thousand or one million years, the North and South poles of the planet are changing places. All observations indicate that over the past two centuries the geomagnetic field has become noticeably weaker. And this can be considered a sign of an early change in the location of the poles.