The mahogany family dates back to the era of dinosaurs 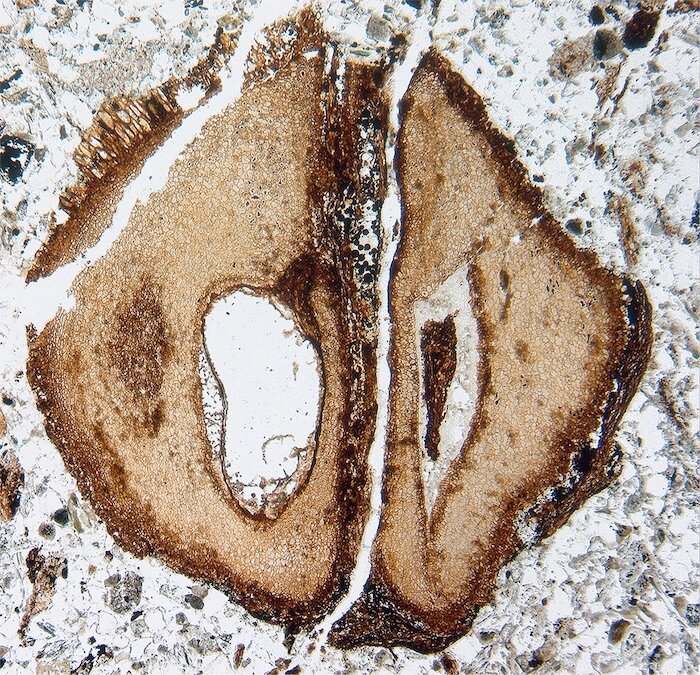 Meliaceae (Meliaceae) – plants, which include some types of trees that give valuable wood (mahogany). This is an ancient family: until recently, paleobotanists found evidence that the Melia existed in the Paleocene (about 60 million years ago), but a new study by Brian Atkinson from the University of Kansas pushes the Meliaceae fossil record for another 15-20 million years.

A well-preserved mahogany specimen analyzed by Atkinson was discovered near Vancouver Island in Canada.

“The stone in which the sample was located was collected by the local fossil collector, Graham Bird, director of the Qualicum Beach Museum of Natural History. He collected it many years ago, and I, in fact, was interested in this stone for other reasons. When I was working with the specimen – mainly to search for other minerals – this thing [mahogany fossil] showed up unexpectedly. So this is partly an accidental find, ”says Atkinson.

To accurately determine the fossil, Atkinson carefully studied the structure of the fossilized fruit, and also analyzed phylogenetic information to find out its relationship with other species in the family Meliaceae.

“I combined the molecular data of living members of the mahogany family with the morphology of fossils as well as living species. Then I submitted this combined dataset to a phylogenetic analysis that allows us to reconstruct evolutionary relationships. Based on this analysis, we found that the fossil is closely related to the genus called Melia, which still lives today, ”Brian Atkinson.

The petrified specimen was called Manchestercarpa vancouverensis. The name of the species indicates where the specimen was discovered, and Atkinson gave the name of the genus in honor of a colleague, Steve Manchester, an employee of the Museum of Natural History of the University of Florida.

“I named it after the prolific paleobotanist, who greatly improved our understanding of the evolution of flowering plants through fossils,” Brian Atkinson.

Atkinson’s new work pushes back the fossil record for Meliaceae during the Late Cretaceous Campanian period, from 72 to 79 million years ago. The scientist also emphasized that the find will help to better understand the speed of early development of flowering plants and, in turn, our understanding of larger modern ecosystems.