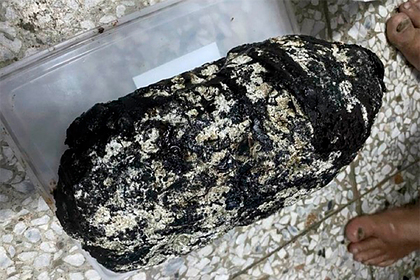 A resident of Lanyu Island named Li found a piece of frozen sperm whale vomit on the beach, which was estimated at six million new Taiwan dollars or 210 thousand US dollars.

The man discovered a four-kilogram black stone, exuding a sweet smell, back in March and decided to take it home. Li’s friend advised him to donate a piece of the find to Kaohsiung National University. Associate Professor of Biological Sciences Cheng Shi-Ie confirmed on October 7 that this ambergris is an extremely rare and valuable find.

The scientist noted that ambergris is formed in the digestive tract of sperm whales. It is often called “sperm whale vomit” or “floating gold”.

Ambergris is used in the production of perfumery. The publication notes that its market value is about 50 thousand dollars per kilogram. Lee is considering selling the find, and wants to spend the proceeds on the family.