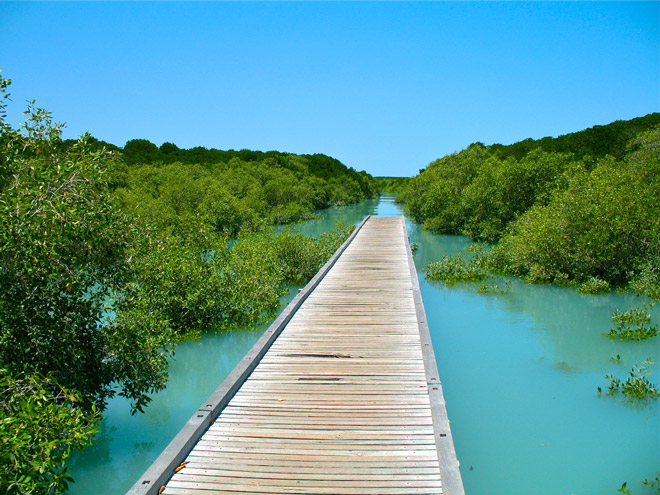 Mangrove forests in Australia – a tangled network of trees and shrubs that grow abundantly along the coastline in places where other plants, as a rule, can not survive. However, last year on the north coast of Australia for some strange reason, mangrove trees began to die in huge quantities. The situation was so critical that the dried roots of the dead plants were visible from space.

The authors of the new study, the results of which were published in the journal Marine and Freshwater Research, put forward the theory that plants died from thirst. Scientists say that last year mangroves could not withstand the triple impact that nature inflicted on them – low levels of precipitation, high temperatures and a drop in sea level. As a result, more than 7 thousand hectares of thickets have suffered in the Australian Gulf of Carpentaria for almost 900 km along the coastline, AFP reports.

From adverse weather conditions, the remote and sparsely populated region of the country, where mangroves thrive traditionally, has suffered. These trees and shrubs feel great in hostile coastal areas and can survive under the onslaught of ocean tides, hurricanes and salt water. These hardy plants are capable of filtering salty sea water, which allows them to survive in conditions in which other plants would certainly perish.

Experts explain that mangroves play a huge role for the Australian coast. So, their root structures keep coastlines from destruction during storms, preventing erosion. They also absorb a huge amount of carbon. With such a massive loss of these plants, scientists warn, they will instead allocate a disproportionately large amount of carbon back into the atmosphere.

After analyzing the satellite images and comparing the fact that the mass death of mangroves coincided with the equally massive decolouration of corals at the nearby Great Barrier Reef and a number of extreme climatic phenomena, the authors of the study suggested that all these events are related to climate change, Provoked by human activity.